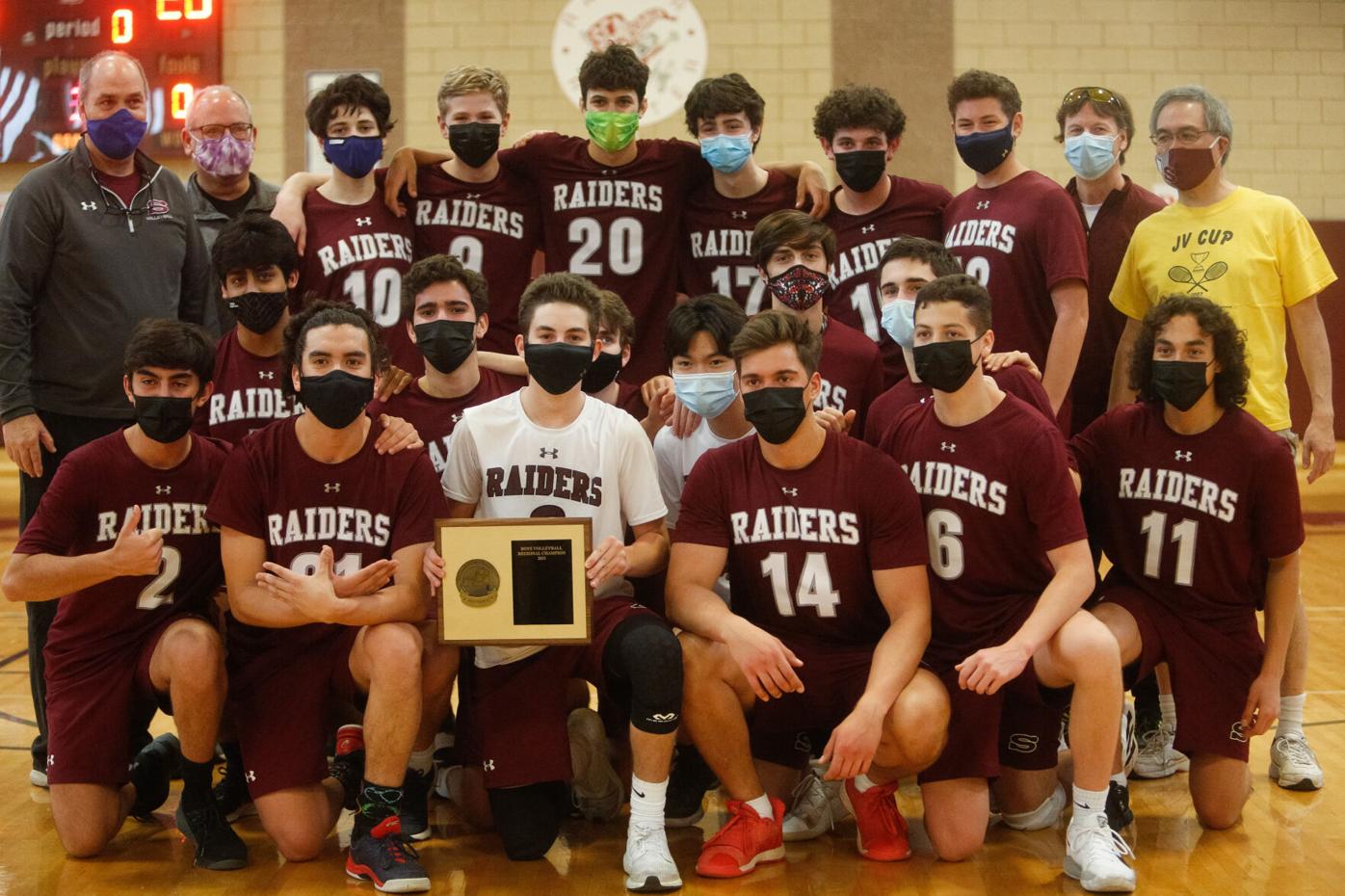 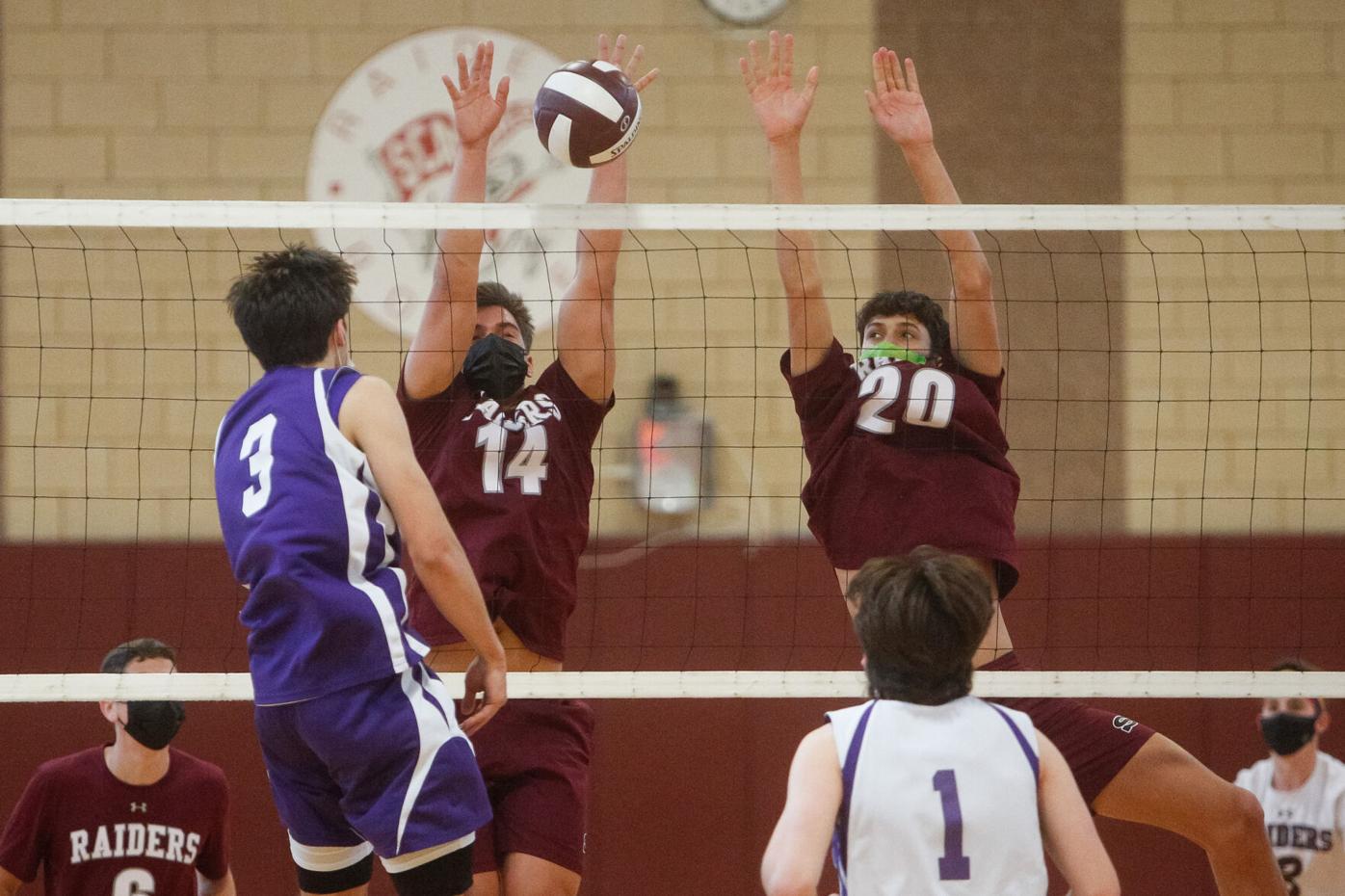 Gustavo Quaresma de Moura and Drew Hill at the net vs. North. 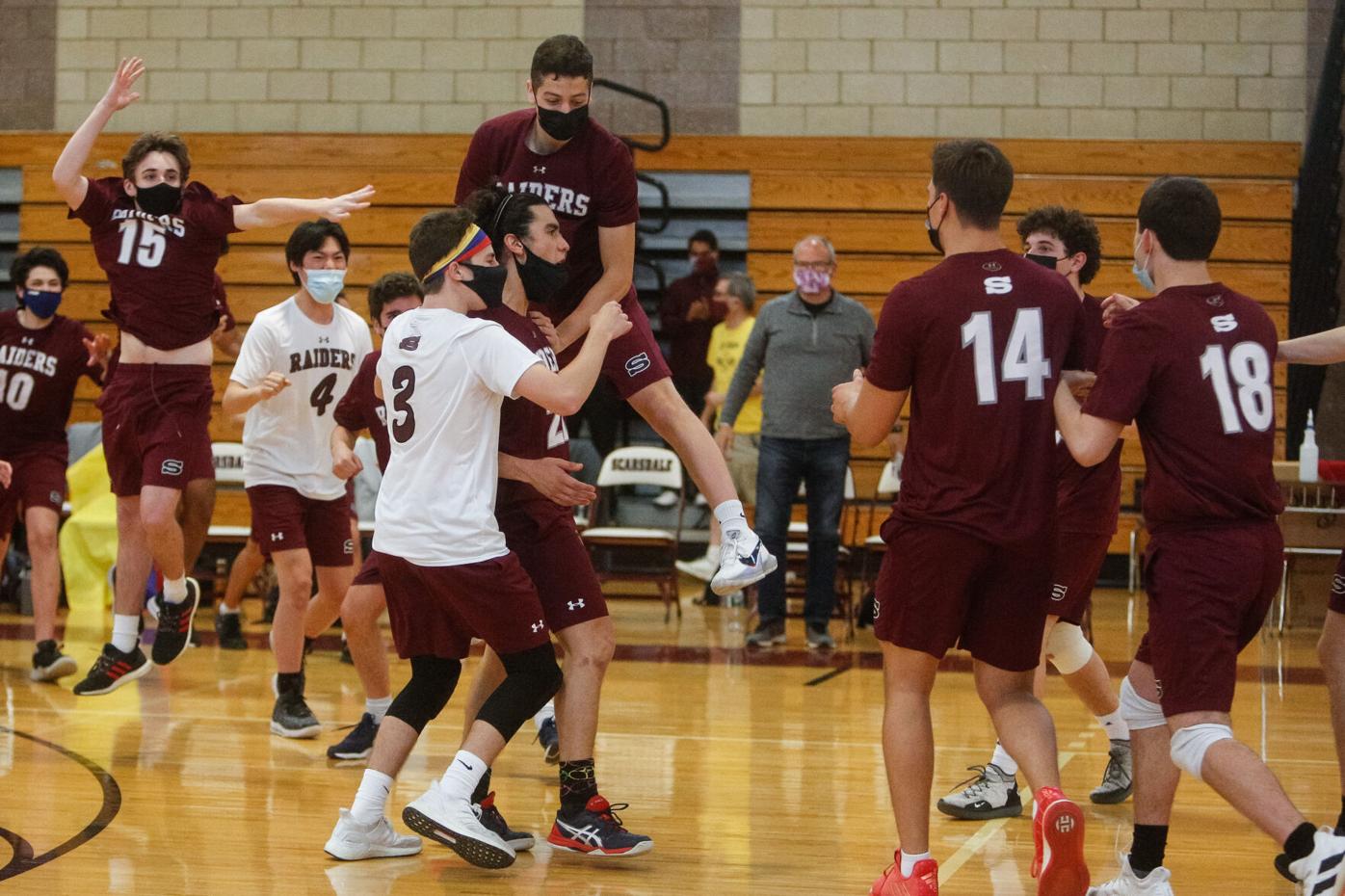 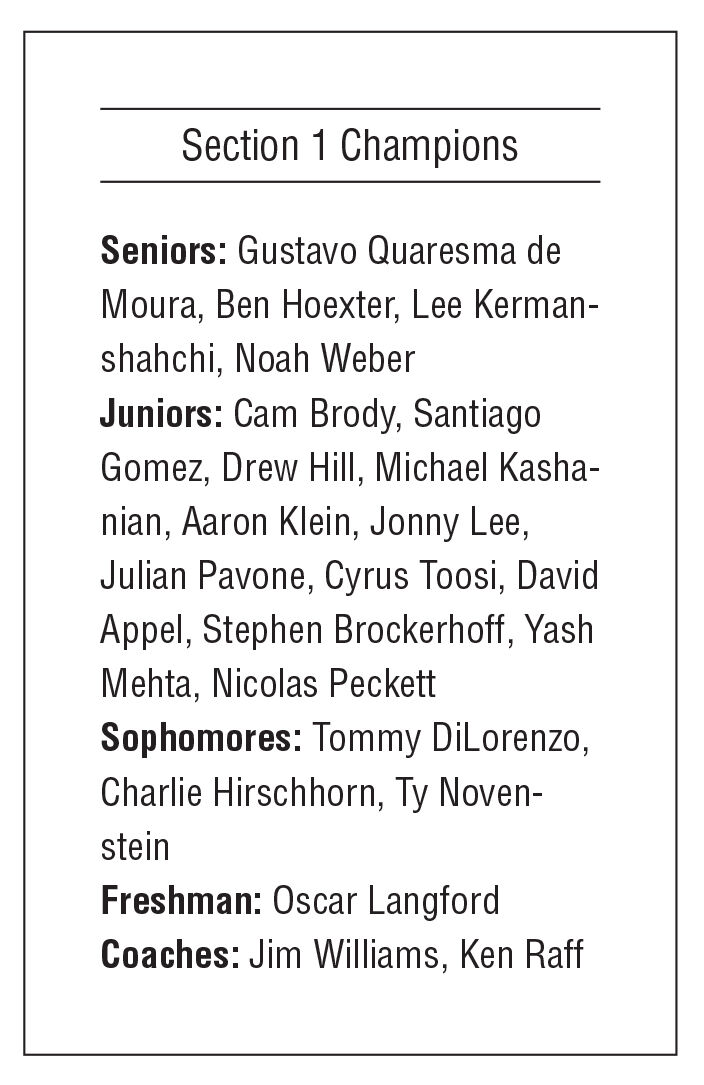 The Scarsdale boys volleyball players and coaches thought they were playing for the Section 1 title against Suffern, but they might have been playing for the title against Clarkstown North in the next match. Either way it doesn’t matter because the Raiders dominated by sweeping both matches and celebrated both wins for their first-ever championship last week.

The fifth-year program only won four total matches over their first three years and in the fall of 2019 came into their own to go 9-7 and fall 3-1 to Suffern in the Section 1 Division 1 finals. By winning a set against Suffern in that match, their first-ever against the defending champs, the Raiders set themselves up for this year’s passing of the torch.

The Raiders, missing starting sophomore Charlie Hirschhorn, lost 3-2 to Suffern in their first meeting of the season this year, losing the fifth set 15-10 despite leading 8-0. In the rematch to end the regular season, the Raiders, at full strength swept 3-0. They were determined to do the same in postseason after they easily beat East Ramapo in the opening round/semifinals.

“It feels so amazing because I remember last year, my first year here, we won our first game and everyone was going crazy and then we had our first winning record in program history and everyone was going crazy, yet every time we played Suffern we got crushed by them,” said junior Santiago Gomez, who moved from Colombia. “In the section finals last year we won one set and got crushed the rest. This time we came back this whole year and our end goal was to beat Suffern. There’s no better place to do it than in the finals. It speaks a lot to the program. A lot of these kids have been playing since ninth grade and they are extremely talented.”

“It was an awesome comeback,” senior setter Noah Weber said. “We were down 15-10 and we were all very nervous. Momentum is huge in this sport and especially against Suffern, so to turn that around and get the momentum on our side was huge going into the second game, which is definitely the most important game. If we could also get the second game from them it put us in a good spot. I think our confidence was raised a lot.”

Winning decisively let the Raiders know they had finally arrived.

“It was so satisfying and we knew we had it in us,” Weber said. “We had been playing great volleyball the whole season, so to see it come together in the section finals was amazing. We couldn’t have handled a loss because we knew we were a better team and we worked so hard. We’re ecstatic to win the section after losing in the finals last year.”

“When you look at the two teams we’re pretty evenly matched with skill-set, but we just did a better job keeping the ball in play, getting those loose balls, getting the ball to the hitters in the right place at the right time and not making errors,” coach Jim Williams said.

Gomez, as Scarsdale’s big hitter — he led the team with 192 kills this season, including 19 in the Suffern finals — finally got the better of his counterpart on the other side of the net, Suffern star Joel Emmanuel.

“I remember facing him last year as a sophomore when he was a junior and it was insane,” Gomez said. “I thought he was a senior and I remember somebody telling me he had another year and I was like, ‘Oh, no, this could be bad.’ But this year we knew we could do it as a team. Suffern is talented, but they go to him almost 90% of the time. We could adjust to that and rely on all our players, focus on our passing and just push them out of their system. We put the serves in the right spots so they couldn’t always set Joel. That’s how we won.”

While Emmanuel was hitting the ball to the ground in the first set, the Raiders helped forced him to hit long the rest of the way and part of that credit goes to the net play of tall middle hitters DiLorenzo and Hill, who each chipped in nine kills, aided by setters Quaresma de Moura with 26 assists and Weber with 12.

“The really big difference is we have two middle hitters and that takes the pressure off Santiago and Gustavo on the outside, so they don’t know where to block,” Williams said. “Tommy was phenomenal tonight. We don’t think he missed a hit, what more can you ask for?

“I think in today’s match Drew and Tommy’s play made the difference between it being a very close game and who knows who would win vs. us holding it together.”

Seeing Suffern as the lone threat, Coach Williams was going to approach the second final against Clarkstown North, which topped Eastchester in five sets to win D2, the way he did Ramapo in the semis, by setting the tone with his dominant lineup and then mixing things up to give everyone a chance. The team had other ideas.

“We wanted to come in with the same mentality because the job wasn’t finished, plain and simple,” said libero Hoexter, who had 33 digs in the two finals matches combined. “There was some chirping at us on social media and we didn’t take that lightly, so we came into this with the no mercy mindset. We knew how it felt last year going home without the chip, so we came here to get that job done and that’s exactly what we did.”

“We saw in the first two games we weren’t going to let them have any chance of feeling like we were going to let them in this game,” Williams said. “We put the pedal to the metal. The seniors and juniors especially had last year’s experience. To go to Pace University, a big college gym, exciting, big time, and to get one win and not the match, I think they didn’t want to go through that again.”

Sophomores DiLorenzo and Hirschhorn were major factors in the team’s success and are building blocks for the future. Both of them stopped playing basketball to focus on volleyball.

DiLorenzo wasn’t planning to play a fall sport in 2019, but his parents felt it would help ease him into high school and he took his skills from basketball onto the volleyball court.

“I started on the JV with [coach Greg] Leong knowing nothing and I was very unenthusiastic about it at first, but I started to really like the sport,” he said. “This year I came back and I wasn’t expecting to be on varsity and I made it and that was cool. And then I didn’t think I’d play that much and it ended up turning out very well.”

Offseason work in the year-plus since the previous season paid off and the trust his teammates and coaches showed in him gave him confidence.

“The seniors are really resilient,” DiLorenzo said. “They’ve been in the program a while when it was a new program and we were not as good as we are now. They teach you resilience and mental fortitude, stuff like that.”

Hirschhorn also didn’t know what to expect this season, but he made his mark as well. He was encouraged to play by friends in the program and hasn’t looked back. He missed the Suffern loss, but is 2-0 in the two matches he’s played against them on varsity and considers the Suffern match the real title game.

“We had just swept them, but they had nothing to lose,” he said. “We had our record and our reputation to lose. No one knows what will happen next year with the team. There are no guarantees, so this was kind of our shot.

“I’m definitely really excited to play next year. No volleyball for over a year and we’re back here in four months.”

Williams started the program in 2016 with 12 varsity players, including Jeremy Wolfe and Steve Wetchler, who were the only players who had some experience coming in and who pushed to start the program. They took pride in the team’s success. “I have been communicating with Jeremy and Steven, the two kids who started this thing, and they are so excited, so happy for the program,” Williams said.

“Greg is instrumental; Greg is utterly instrumental,” Williams said. “He’s given them those individual skills and then I’m taking them and getting them to play as a team. I spend very little time on individual skills. He’s building them. He comes to our practices and he’ll work with guys one-on-one with their skills. I can’t do this without Greg. This is really a team effort between Greg and I and he deserves just as much credit for building this program to where we’re at right now.”

Williams has high hopes for next fall, which will be in four months, that it will be a full season and travel will be permitted so not only can the section winner compete at states, but so his team can seek out better and different competition throughout the regular season.

“We need some new blood to get a better sense of things and now we’re good enough to go compete with other teams and give them a real match as opposed to some guys who run around the court trying to play volleyball,” he said. “We’re at that point.”

In the shortened, moved COVID-19 season in which the Raiders had to quarantine during and a few days after spring break, the Raiders made the most of the situation.

“We had a very short season and a bunch of new players — every single spot except two were new starters — and Coach tried out a bunch of different rotations in the earlier games and finally before the end he realized what it was and it stuck,” Gomez said. “We had two sophomores starting on the team, Tommy and Charlie, and they did a good job. We had our senior Ben Hoexter, who wasn’t a starter last year, but he did his job perfectly, and our two senior setters Gustavo and Noah did their jobs amazing.”

“They leave a good legacy and a good impression on the kids who remain next year,” he said. “They showed them what this program can be and they set the standards. They’re pushing everyone to meet the standards. Everyone is going to push to win. Those who were on the bench were still celebrating, cheering everyone on, pushing us 100% and they’re going to bring that energy on the court next year.”

Though the seniors were celebrating their season and their wins, they will always wonder what would have happened if they had gone to states. But what they really walked off the court thinking about was how strong of a program they are leaving compared to the one they started with and helped build.

“I am so ecstatic with the direction this program is going with the younger guys under Coach Williams and Coach Leong,” Hoexter said. “They got two new assistants this year. The attention is here and the fans and students really care about the program. We had a lot of fans here all three games throughout the playoffs, so it was really fun.”