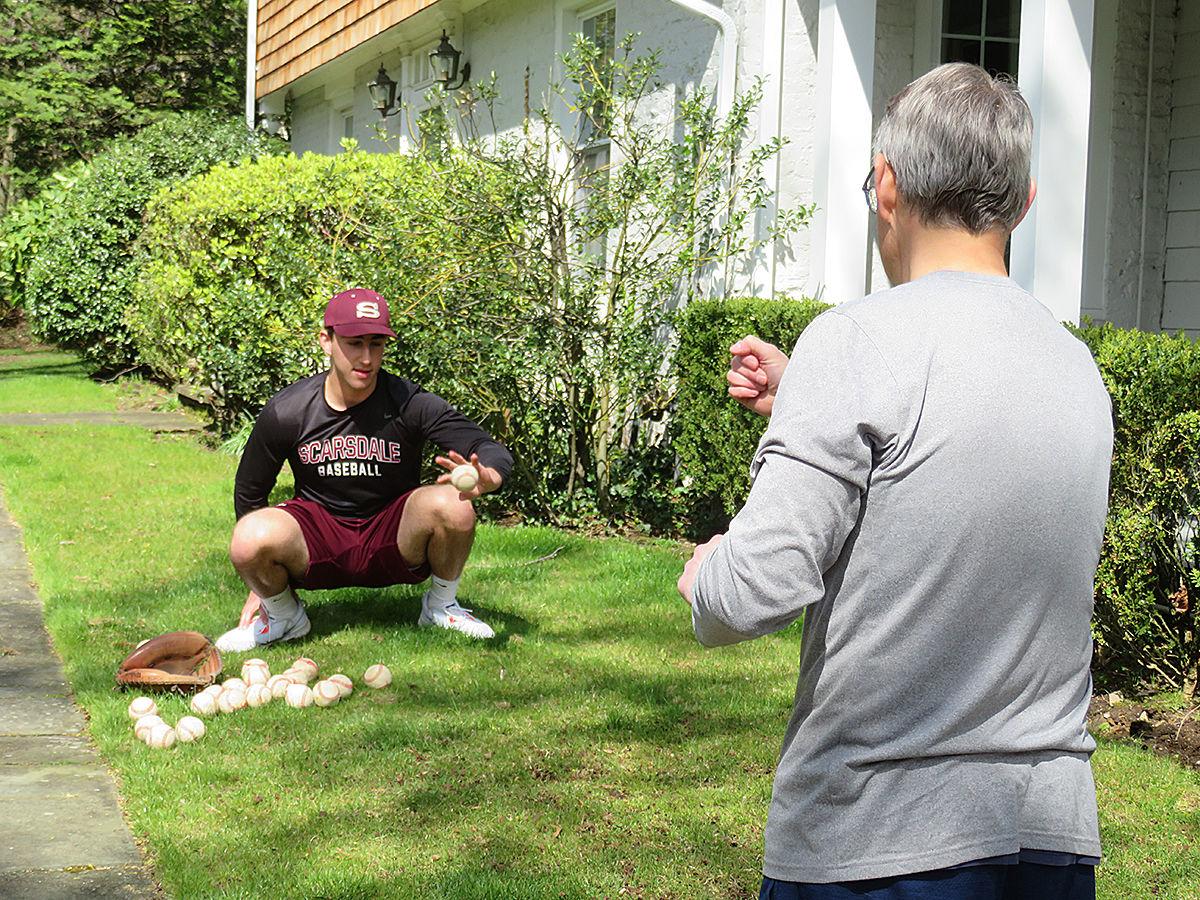 Sam Feldman works on catching drills with the help of his dad, Joe. 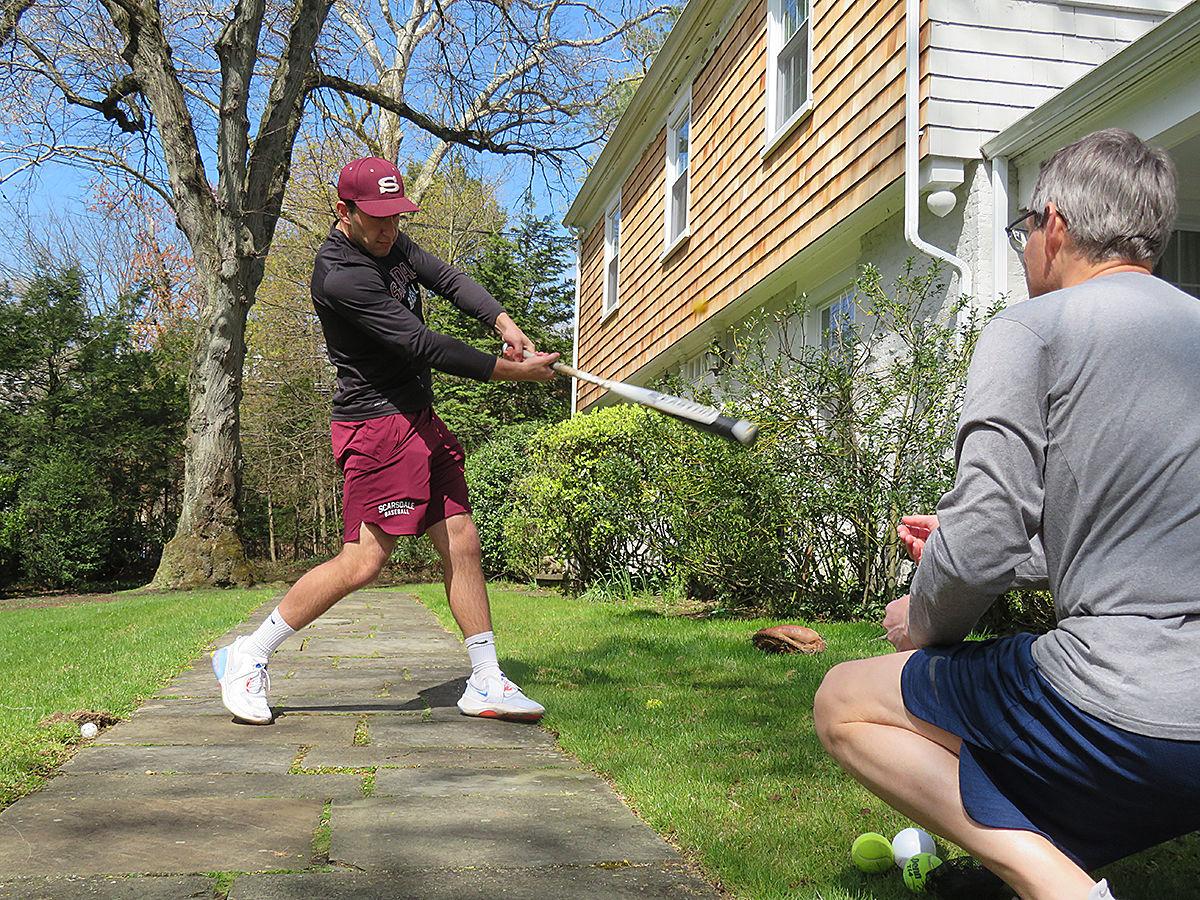 The closure of schools as a result of the COVID-19 outbreak has brought on more challenges than just adapting to new learning methods for Scarsdale high schoolers. Student-athletes have been forced to rethink their traditional ways of preparing for the spring season.

Diverse spring sports — the high school supports baseball, softball, lacrosse, ultimate, golf, crew, and track and field — lead to different approaches to training and preparing, but ultimately all are rooted to the same goal of staying in shape in hopes that preseason begins on May 16, currently the target date for students to return to school.

Scarsdale is the only school in Section 1 that did not have any preseason practices. The Sunday night before the first day of practices, Scarsdale announced it was closing schools for 10 days in order to clean buildings after a middle school teacher tested positive for coronavirus. With Gov. Andrew Cuomo eventually closing down all schools in two-week increments, Scarsdale students never returned to school.

Senior baseball captain Sam Feldman has adapted to workouts at home and found ways to compensate for not having a home gym. He often has his dad, Joe, working with him for soft toss or catching drills. He’s also got a hitting tee and net in his house.

“I’ve been doing a lot of body weight exercises, such as push-ups, sit-ups, planks, squats and pull-ups, anything like that to stay in shape,” Feldman said. “For baseball, I'm hitting off a tee, doing catcher drills and watching whatever games I can find.”

With the physical aspect taken care of, the mental side is the key. “Although a lot of people are upset that things aren't happening right now, we have to remember that this whole situation isn’t in our control,” Feldman said. “You can’t worry about whether there’s going to be a season or not. It’s important to work as if there’s going to be one and take each day one at a time.”

Feldman has been on varsity since his sophomore year and was named captain last year as a junior, earning praise for his dedication and leadership. Among the ways Feldman motivates himself is by thinking about last year’s first round sectional loss to Suffern.

“I think about how we ended last season,” he said. “We came so close to winning the league and we couldn’t get the job done. We have a big group of seniors returning and they all have the same motivation because they were all on the field when we lost. If we do have a season, I can guarantee we’re going to get it done this year.”

As a distance runner, junior Alexa Doyle spends most of her year staying in shape with long runs. Being in prime condition is crucial for a runner.

“I’ve continued training by running and sticking to our team schedule as well as incorporating other outdoor workouts such as walking and biking into my daily schedule,” Doyle said. “It’s really important for me not to lose my edge just because there’s no school.”

The girls track team has formed a close-knit community through group runs where they push each other to reach their potential. The effect it has had on Doyle’s ability is evident in her mindset.

“I’ve been using the team as my drive,” Doyle said. “We've all been talking and sharing what we're doing each day, and we all miss each other a lot. The team has been very helpful during this time and motivates me to continually push myself and get better, whether or not there is a formal spring season.”

Another staple of the distance team on the boys side is Alex Friedman, a junior. Friedman has consistently contributed to the success the team has seen in cross-country, indoor track and spring track. Friedman has taken this unique opportunity to train more.

“Coach [Rich] Clark has been giving us running practices to complete, which is essentially the same as a normal season, so the coronavirus hasn’t really affected my training that much,” Friedman said. “If anything, it's giving me more time to run. I’ve been running twice a day now, versus one time per day because of school.”

Friedman’s hunger to improve his times in every race has shown over the years, with his mile time dipping to as low as 4:44, his 3,200-meter to 10:07 and his 3-mile to 16:17 3. But it’s not just improving his times that Friedman looks forward to: it’s the camaraderie in what is often conceptualized as an individual-based sport.

“I look forward to hanging out with my friends on the team again,” Friedman said. “I really miss them and it’s been hard because we can’t run together, but we’ve all been in touch and very supportive of each other’s training even if we can’t actually be there in person.”

Charlie Schulhof has set the tone for the work ethic spring athletes need to maintain in order to improve their game under social distancing guidelines. Now a junior, Schulhof has shown great skill during the last two springs for the boys golf team. As a player who was one stroke away from making the second round of sectionals in 2019, Schulhof knew he would need to organize a routine months in advance to ensure that the development and enhancement of his technique would be established before the season began.

“I’ve been practicing hitting golf balls with my trainer to increase my swing speed,” Schulhof said. “I’m focusing on development this year and I got a lot better over the summer. I went to a couple of camps and played in a lot of tournaments where I shot some great scores.”

The school closure added an extra challenge. “During this time of the shutdown, I’ve been doing stretches and set up a net I bought at Dick’s and I’ve been chipping into it,” Schulhof said. “I also use a simulation device, which helps indicate what the yardage would be on each swing which has been really helpful.”

Though the future of the spring season is uncertain, Schulhof remains optimistic about what he wants to accomplish if there is a season. “I really want to make it to the second round of sectionals this year and I’m trying to move my handicap down a couple of strokes,” Schulhof shared. “I really want to get down to the even par level consistently. There’s a bunch of guys on the team who have already reached that point and toward the end of last year, I was getting much closer to that level and now I want to reach it.”

While spending last year on the developmental girls golf squad, Zoe Kulick was able to see formidable improvement in her golf game during that time. Now a junior, Kulick is preparing by utilizing the limited space she has.

“Despite the fact that golf is played on many acres of land, there are actually so many ways to become a better golfer without leaving your house and I have really been trying to take advantage of that,” Kulick said. “I set up a small putting drill in my living room and when it’s nice outside I do small chips and short shots in my yard. When it is too cold or rainy, I make sure I have enough space and practice my swing.”

Boys lacrosse junior Adam Wasserman is getting used to the team’s conditioning adaptations during social distancing. Wasserman, who was a starter on defense as a sophomore last year, appreciates what the coaches are doing to keep the team on task.

“Our coaches have been sending out spreadsheets for workouts and we also have an app which allows us to count our reps,” Wasserman said. “This method helps create friendly competition among the team for who can get the most reps, which really motivates us to ‘hit the wall’ and keep stick skills active.”

The lacrosse team was heavily favored to make a deep run in the playoffs last year, but suffered a disappointing defeat to Lakeland, which led to an unanticipated early exit. Wasserman said the team is sticking together through this time and retains great team chemistry.

“We all have team Zooms every week along with group chats,” Wasserman said. “Before quarantine, we all hung out and we’re all close friends outside of lacrosse.”

Members of the boys tennis team have also put a lot of effort into preparing for the season, with junior Danny Stonberg helping lead by example.

“I’ve been going on runs and performing workouts at home,” Stonberg said. “I’m trying to diversify what I do, whether it’s cardio, upper body or legs, because all of them are used in tennis and that’s what helps me improve my match play.”

Stonberg, who has spent the last two seasons on the junior varsity team, aspires to play varsity. He recognizes he must push himself during this available time, but must rearrange his methods of preparation to do so.

As they await the word on the fate of their season, Scarsdale’s athletes, despite being separated socially, remain united in their preparation.