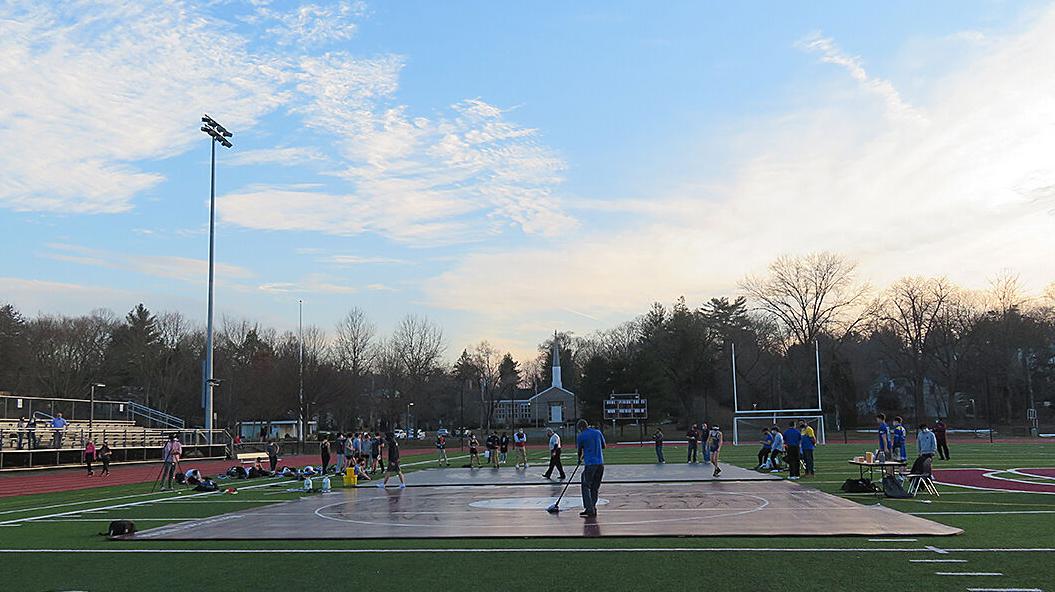 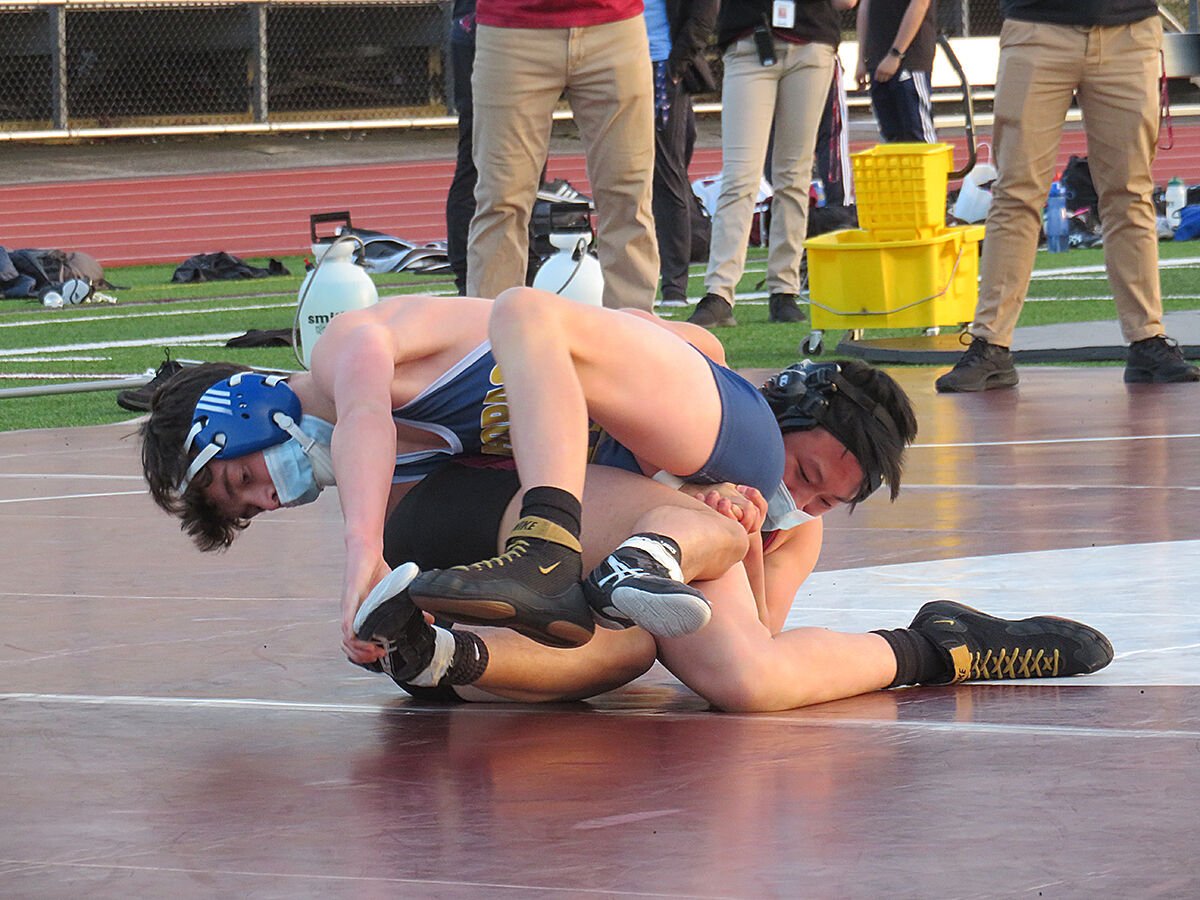 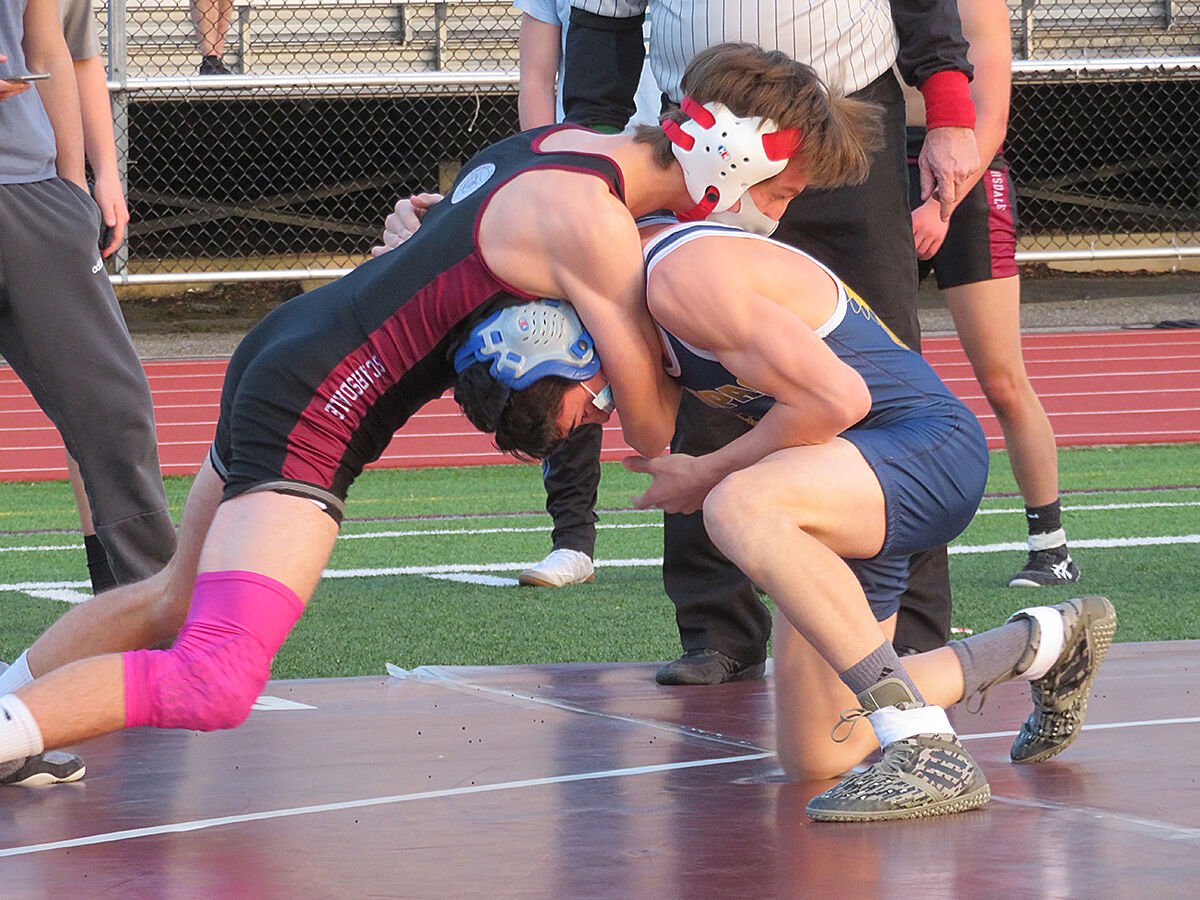 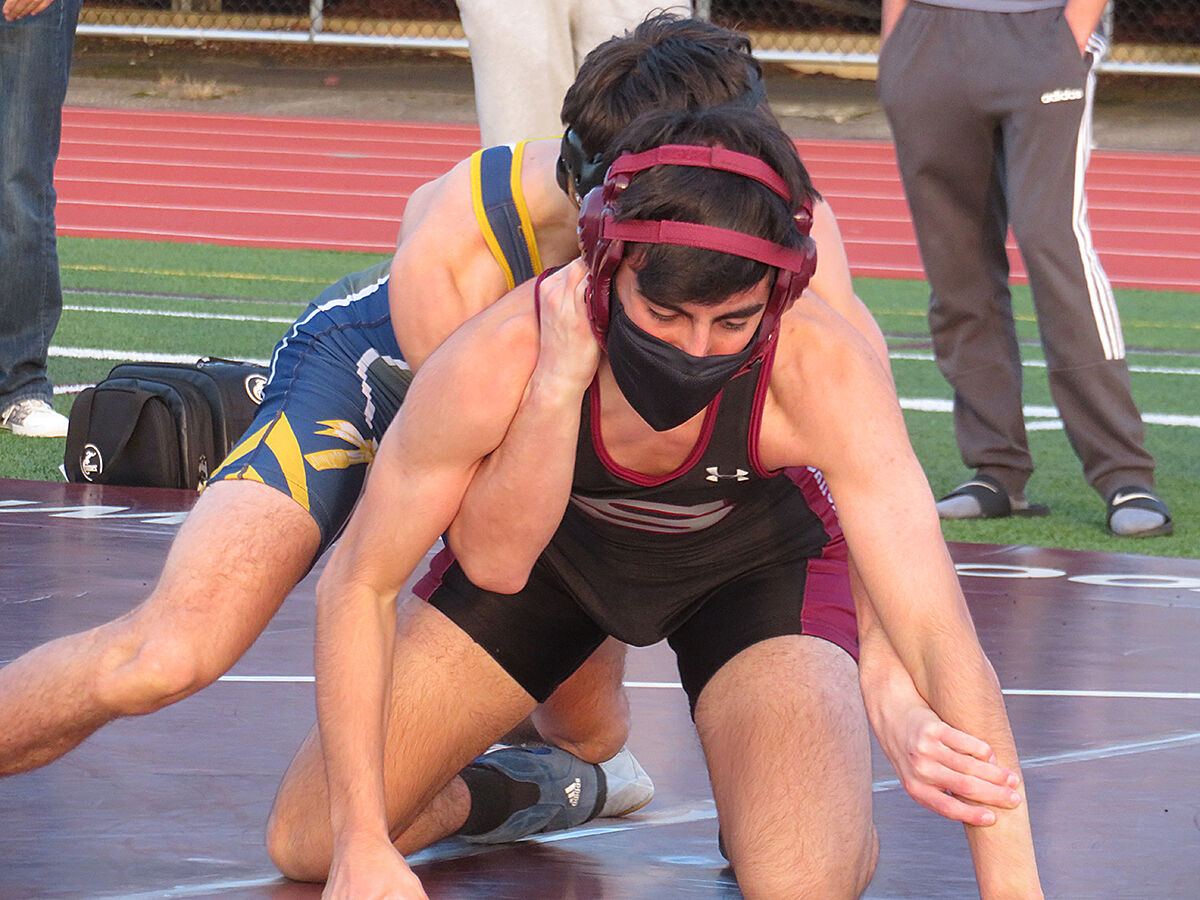 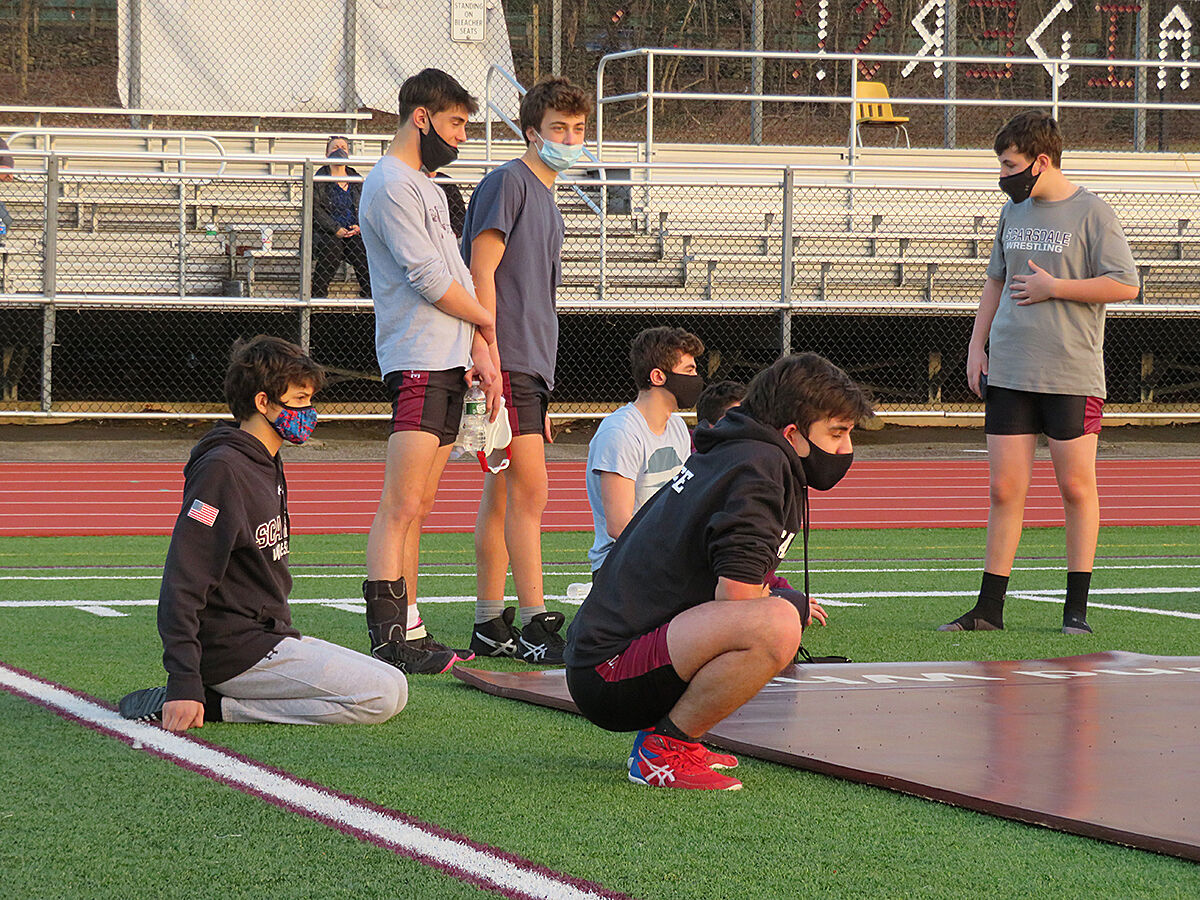 The wrestling team looks on during matches. 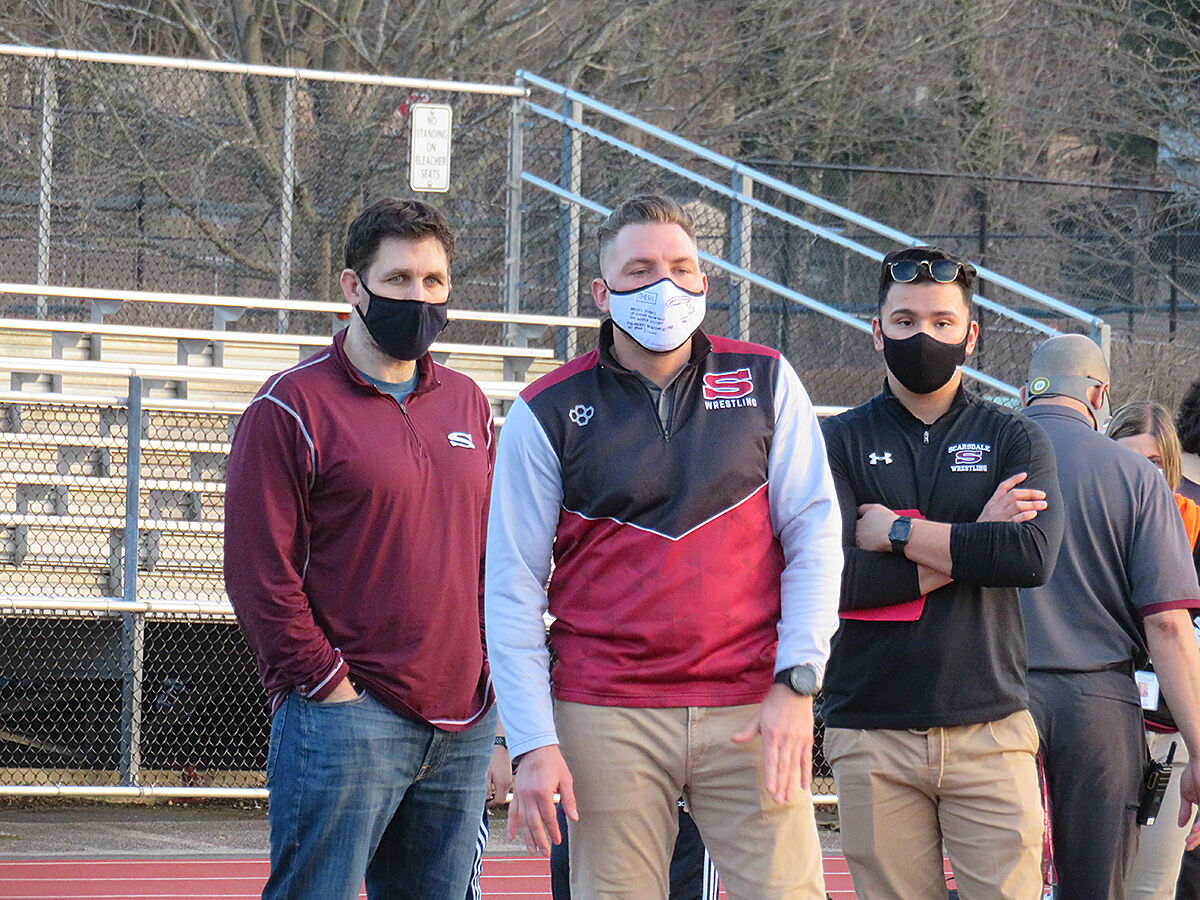 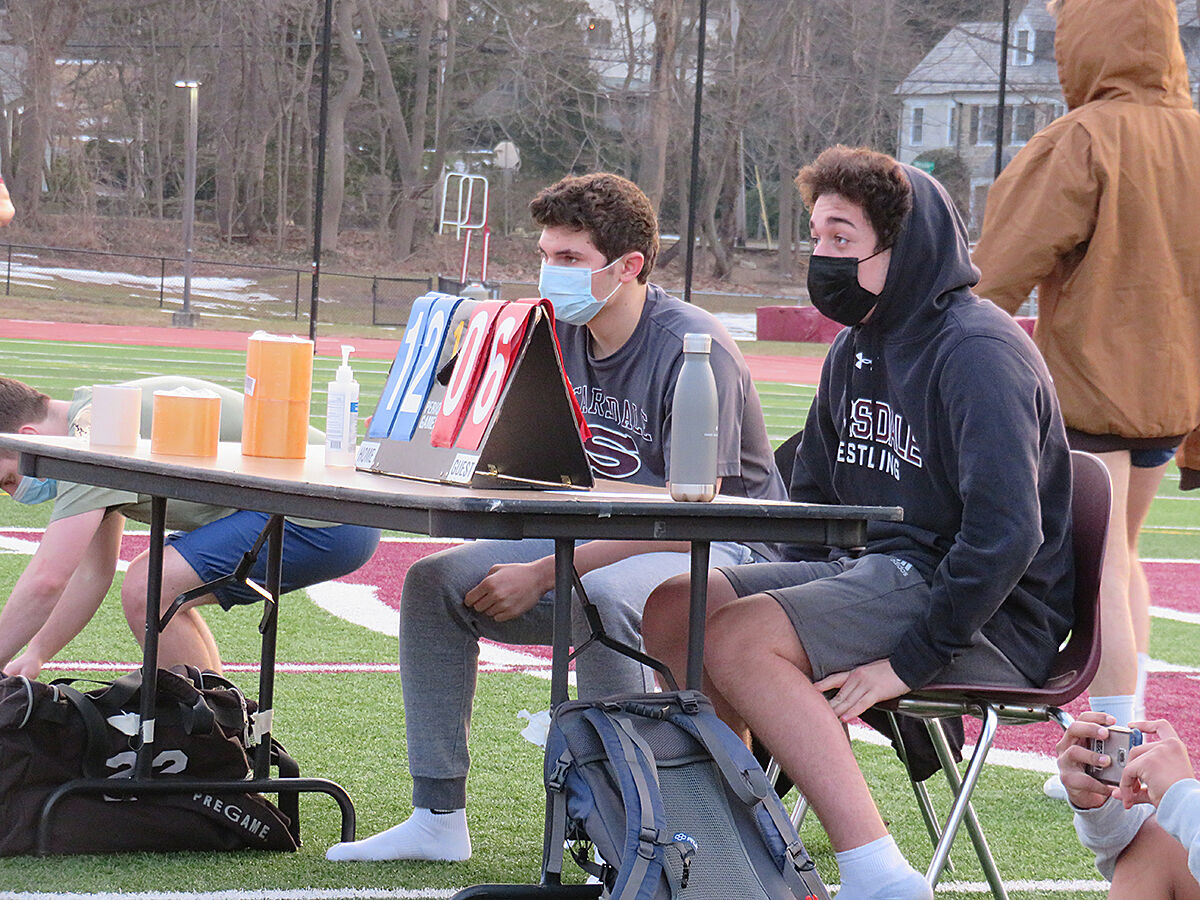 In a Section 1 wrestling first, the Scarsdale Raiders held an outdoor meet on Butler Field on Thursday, March 11. It was the first and last match of the team’s season.

After first being denied the opportunity to compete on Feb. 8, the team’s three senior wrestlers, captains Johan Monge, Lee Kermanshachi and Brendan Knopp, said they were happy to be approved for full contact practices and hoped to have one chance to compete. They got their wish.

Scarsdale was one of nearly 20 Section 1 schools not to approve wrestling, deemed a high-risk sport by New York State, for interscholastic competition this winter.

At the Feb. 8 Scarsdale Board of Education meeting, district administration cited American Academy of Pediatrics guidance on masking in the sport as provided by the Westchester County Department of Health to recommend approving the sport for competition would be an added liability to the school. In February, the board of education agreed to allow wrestling to train in full, but not compete unless the AAP wording changed, as per administration and legal counsel guidance.

AAP guidance was in fact updated March 1, but it wasn’t brought to the BOE’s attention until exactly one week later at the board’s meeting on Monday, March 8.

“During wrestling contact, a face mask could become a choking hazard and is discouraged unless an adult coach or official is closely monitoring for safety purposes. Individuals who swim/dive/participate in water sports should not wear a face mask while they are in the water, because a wet face mask may be more difficult to breathe through. Any face mask that becomes saturated with sweat should be changed immediately.”

The key addition for wrestling was the wording “unless an adult coach or official is closely monitoring for safety purposes.”

As promised, the BOE voted to approve wrestling for competition against continued objection by administration, which now claimed that it wasn’t just the masks. “It really is a COVID issue,” superintendent Dr. Thomas Hagerman said late in the discussion at that March 8 meeting.

Athletic director Ray Pappalardi said administration was “less than enthusiastic to recommend we move forward” on wrestling due to the “nature of the sport.” Pappalardi said he had “every trust” in the athletes and coaches, but the dangers outweighed that.

Board members immediately challenged the administration’s shift in direction. BOE member Ron Schulhof asked why COVID was now a concern with wrestling when the board was told it was a masking language and liability issue. He said the COVID-19 risk issue should be for all sports, not just certain ones. “Let’s not disillusion ourselves about what basketball is like at a high level when they’re playing,” he said.

BOE member Amber Yusuf, who was in favor of allowing wrestling last month because the original language in AAP used the word “discouraged,” which did not seem like a mandate to her, again challenged why with the change of language the administration wasn’t in favor of allowing competition. Pappalardi said it was the “close proximity” and “potential spread.”

Yusuf said she didn’t like “picking and choosing” as other high-risk sports that were allowed like basketball and ice hockey have seen quarantines and positive cases. Hagerman, who said he had been “agonizing” over the topic and the “inherent unfairnesses,” again said it comes down to liability. When it comes to other districts he said they had different processes for decision-making and said some purposely did not consult legal counsel to avoid being told no.

When looking at the bigger picture of the high-risk quarantines and cases, Hagerman said, “That causes some concern as a person who is supposed to be in charge of the health and safety of students in this district. I don’t know if that’s a pattern necessarily to have a quarantine in each of three different sports, but I do think we’re watching that. That’s something that certainly is alarming if we’re saying this is a proof of concept of something we’re watching to see what happens.”

Hagerman cited the “very intimate contact” and said, “In light of all the pieces we’ve talked about I personally could not get comfortable supporting wrestling for those circumstances. I get that’s unfair.”

The BOE made good on its promise and unanimously approved wrestling to compete. “We recognize that it was the board and our parents communicating with the board,” coach Jeremy Szerlip said. “I think the community did a great job of stepping up and getting this for our kids. The board did a great job. We’re very happy with that.”

The issue was now the time crunch as the season had to end by March 14, leaving only a few days to secure a match. The only one Scarsdale could get, as teams were either done with the season or fully booked, was Mahopac.

Mahopac’s team is half the size of Scarsdale’s, but Szerlip said each of his seniors would have a match, Mahopac’s wrestlers would wrestle multiple matches if necessary and Scarsdale would also be able to wrestle against its own wrestlers as the coaches aim to get as many kids a match as possible.

The previous Friday, March 5, Scarsdale held an intrasquad meet where the coaches drafted teams, they held matches, had timers and scoring and wore their singlets.

“It’s a great way to end the year,” Szerlip said. “It’s a mentally exhausting year for sports and everybody with COVID. To get that chance to wrestle is a great way to finish the season.”

On what was the nicest day of the year weatherwise to that point, the Raiders held their match against Mahopac in a very different setting than they are used to. Wrestling outdoors and sanitizing the two mats between matches were two of the major COVID-19 protocols used to protect both teams.

Though everything was official from the official to the scorer’s table, no results were kept. It was just two teams wrestling hard on the mat and cheering, laughing and enjoying themselves off the mat.

“The experience was so fun,” Szerlip said. “Thank you to Mahopac for making this happen. They had a lot of matches and they stepped up. They didn’t need this one. It was good for us that they came.”

Not believing they would ever compete and with the fall 2 season (football and volleyball) having started that Monday, some of the wrestlers were moving on, but they refocused knowing they would be at a disadvantage compared to a team that had been wrestling matches for two weeks or more.

“We were rusty so for the first match we did pretty well against a seasoned team,” Szerlip said. “I put a lot of young guys in so they could get experience just to see what it’s like. They can get over the fear so next time it’s not their first time. I thought our young guys, though they didn’t win, they held their own. It’s about the experience. That was my whole goal today.”

Though Monge was the lone senior to win his match, Szerlip credited Kermanshachi and Knopp for wrestling hard.

“Our seniors wrestled great,” he said. “Lee was in that match the whole time. He had him almost pinned that one time. And I think he left it on the mat. Same thing with Brendan. He wrestled a good match. He just died at the end. Part of that is we haven’t been able to train as hard as we could. And Johan won his match. It was a good, close match and he pinned the kid at the end.”

As captains, the trio rose to the occasion of leading a program through a pandemic season. “They really kept them together,” Szerlip said. “For a team that gets the crap beat out of us all the time they’re just a fun, cohesive group and they keep coming back. I’m always impressed with that. It’s a tough sport. They keep their heads up and had a positive attitude.”

Knopp was “upset” he lost, but happy to have had the opportunity. “It was a very good experience for the younger kids and we came out here to get me, Johan and Lee our last matches before we go off to college, so it was good,” he said.

Monge was grateful to the board of education and his coaches for giving him the senior day — though highly altered — he had dreamed of since seventh grade. “All offseason I spent practicing and weightlifting alone in my basement,” he said. “I was really happy to end it this way, outside with the school cheering me on. Last match, last win, last pin. It was a great way to go out for me and my teammates.”

Watching the younger wrestlers was also a highlight.

“It was really fantastic,” Monge said. “This year we have a very good crop of freshmen and sophomores. Being able to get them that experience to wrestle live in front of an audience was really beneficial to them now and in the future.”

Kermanshachi called it “nuts,” but appreciated the historical perspective of what he and his teammates were a part of. Continuing to pass on the team’s “sense of family” was most important to him throughout the season.

“We hope in the years to come they can carry that on so this year doesn’t go to waste for them,” Kermanshachi said. “We have to pretend like it was a normal year. We can’t let COVID dissolve this year, because that’s basically what it has done to everything.”

Kermanshachi had COVID-19 in December and said he still can’t taste three months later. “I didn’t even see my dog for two weeks,” he said. “I just kept thinking when I’m out there I’m going to live life, to give everything my all — on the mat give it my all, in school give it my all. I definitely learned from that. Even though we only got one match we are so thankful.”

Mental wellness was another issue Kermanshachi stressed and he wasn’t convinced the district was doing enough to that end, especially seeing that the board had to overrule the administration just to get this one match to happen. The recent suicide of 2019 graduate Brian Lilly hit home for him and many other Raiders, including many grads on the wrestling team who knew him, and they know how fragile life is and how important it is to have proper support.

“We were all looking forward to seeing Thomas Hagerman come,” Kermanshachi said. “Not seeing his face here after this being such a big event, a triumph for Scarsdale, I guess it says a lot that he did not come watch and support us.”