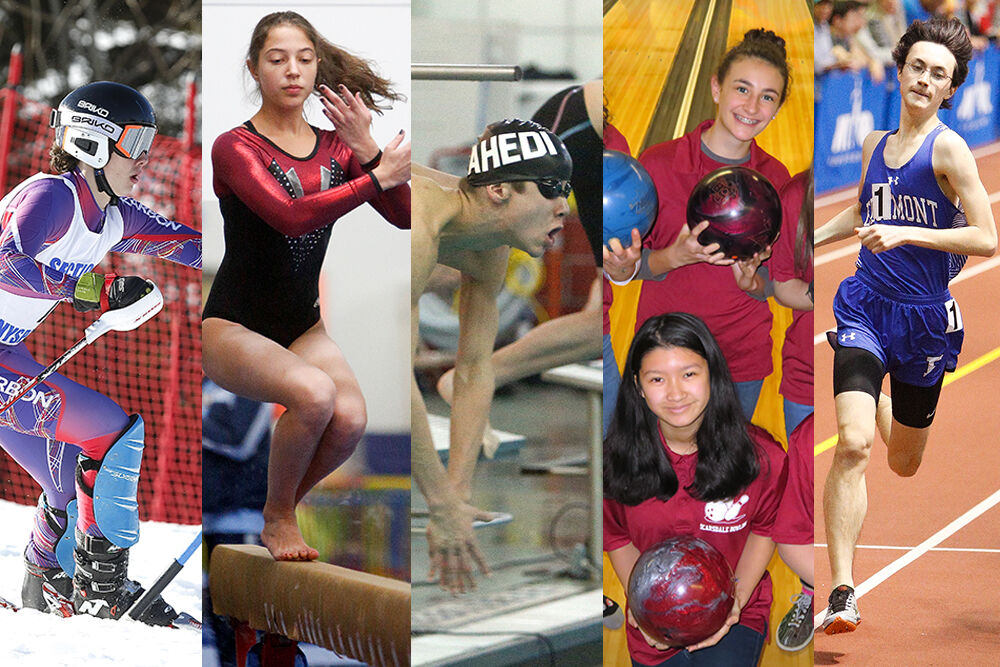 Skiing, gymnastics, boys swim and dive, bowling and track and field were postponed from Nov. 30 to Jan. 4 by Section 1 on Friday, Nov. 20. 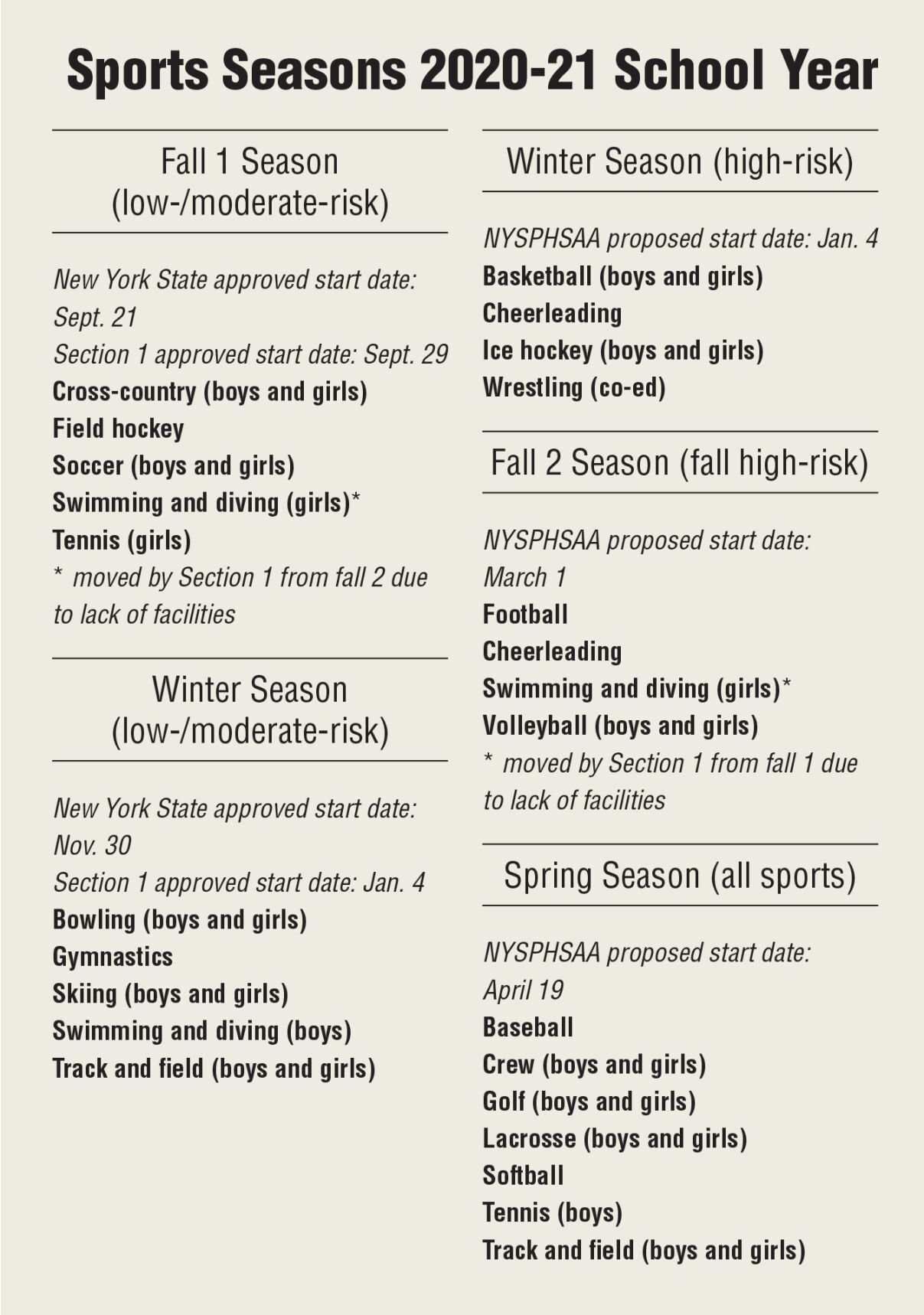 The low- and moderate-risk winter sports are bowling, skiing, gymnastics, boys swimming and diving, and indoor track and field, while high-risk are cheerleading, wrestling, ice hockey and basketball.

Following a mostly successful fall season featuring soccer, cross-country, field hockey and girls tennis, with high-risk football, cheerleading and volleyball and, facing a facilities issue, girls swimming and diving pushed to fall 2 between winter and spring, Section 1 Executive Director Todd Santabarbara said in a press release, “Today’s decision to delay the start of low and moderate risk winter sports affords school districts additional time to effectively transition and plan for the start of a winter season in a safe and responsible manner.”

In the press release, Section 1 said, based on a survey of all 82 schools and “thorough review of the information provided by Athletic Directors and Superintendents … there was evidence of a clear desire on the part of the Section One member schools to delay the start of low and moderate risk winter sports.”

Modified sports are slated to start Tuesday, Jan. 19, 2021. “This date will continue to be monitored and will be reevaluated prior to the start of the season,” according to the press release.

Districts may make their own decisions for further delays or cancellations.

With COVID-19 rates rising throughout New York State and nationwide, December will be a crucial month in determining if and when sports start up once again.

“We were looking to do the high-risk as open gyms and the low- and moderate-risk sports were pretty much ready to go, though we’re tweaking some of the details right now related to gymnastics and mask-wearing and some of the protocols related to swimming since you obviously can’t wear masks in the water,” Pappalardi said. “We were pretty substantially ready to go and now we’re working out what we will do between now and January 4.”

Like he did in the fall, DeRosa sent his winter coaches the information they needed to develop plans to structure their programs.

“We were going to be ready to start on the 30th,” DeRosa said. “I was a little bit disappointed when that ruling came out, but I know they are doing what they feel is best for the health, safety and well-being of the athletes.”

DeRosa understands the decision as it allows the schools the chance to get a better idea of where COVID-19 trends after the holidays. “I’m pretty sure by the time we get out of winter break we’ll have a good idea of where we stand and the comfort level for starting on Jan. 4,” he said.

Pappalardi’s greatest concern for low- and moderate-risk sports revolves around facilities for swimming and diving and track and field. For swimming, Scarsdale will use Purchase College and the YWCA. Locker rooms, bathrooms and pool deck space will be an issue and there might not be any head-to-head competitions.

“It’s highly likely that most meets will be virtual,” Pappalardi said. “There are very few schools allowing other schools into the pool area when their team is there.”

As far as track, the Armory in New York City plans to host meets on a smaller scale than normal. Pappalardi said he is “not completely happy with this” and has proposed doing either outdoor meets in the winter, weather permitting, or ideally move indoor track to outdoors in the fall 2 season.

DeRosa said of the Armory, “They seemed to have everything well thought out. I was comfortable with using that facility. If the weather cooperates I would be happy to host a meet or two at Blanford.”

Pappalardi would like to see State and local decisions made in a more timely manner “so it’s not continual reactionary approach as we move between seasons.”

“My greatest concern is the timeliness of the information we get,” Pappalardi said. “It’s very much been last-minute…”

One major issue the constant delays so close to the start of the season presents is that some of the paperwork involved in getting athletes approved for an upcoming season is only good for 30 days. Schools were getting close to starting that process if they hadn’t already, so they will have to pick a new date to start doing that prior to winter break, knowing that if sports don’t start Jan. 4 they could have to start that process over.

With open gyms and unofficial practices, students aren’t required to file paperwork, though coaches will have to do health screenings and track attendance. Pappalardi said Scarsdale would continue to use cohorts for open gyms, off-season workouts and the beginning of the official preseason. Some sports will rotate cohorts every other day, while others might do both cohorts in the same day with time between so A and B students are not on campus at the same time until just before the season starts.

“Here’s the tricky part: how much dryland can you do, how much skill work can you do without people becoming disheartened?” Pappalardi said. “I think all coaches are trying to balance that right now. And this is not knowing what will happen Jan. 4. Will they push it back again or are we going to be full steam ahead with all sports? Full steam ahead with low and moderate? There is substantial concern about what the holidays will bring as it relates to schools.”

Pappalardi believes the use of cohorting in preseason had an unintended benefit for fall teams and coaches.

“Besides the safety pieces, which were being able to contact trace and not shut down an entire team, it was a way to establish the protocols in smaller groups and there was a real focus on skill development,” he said. “Just visiting the practices it was great to see, but then later to watch the way the teams use the entire field, pass the ball, do all the basics correctly, was incredible for me.

“The best example of that is girls soccer. Their passing was meticulous. Their body positioning, their execution, the way their formations run, it’s textbook. You know that considerable time was spent on that in the first few weeks and then reinforced after they came together.”

DeRosa said wrestling is most likely the lone Edgemont sport that will utilize some sort of cohorting due to a large team being in a half gym. So far only basketball and wrestling have requested gym space.

“Basketball is chomping at the bit and so is wrestling,” DeRosa said. “They’re putting together workout plans and submitting them. I’ll have to look at them and make sure they’re in line with all of the guidance. If we’re able to get some workouts in, I think it would be beneficial.”