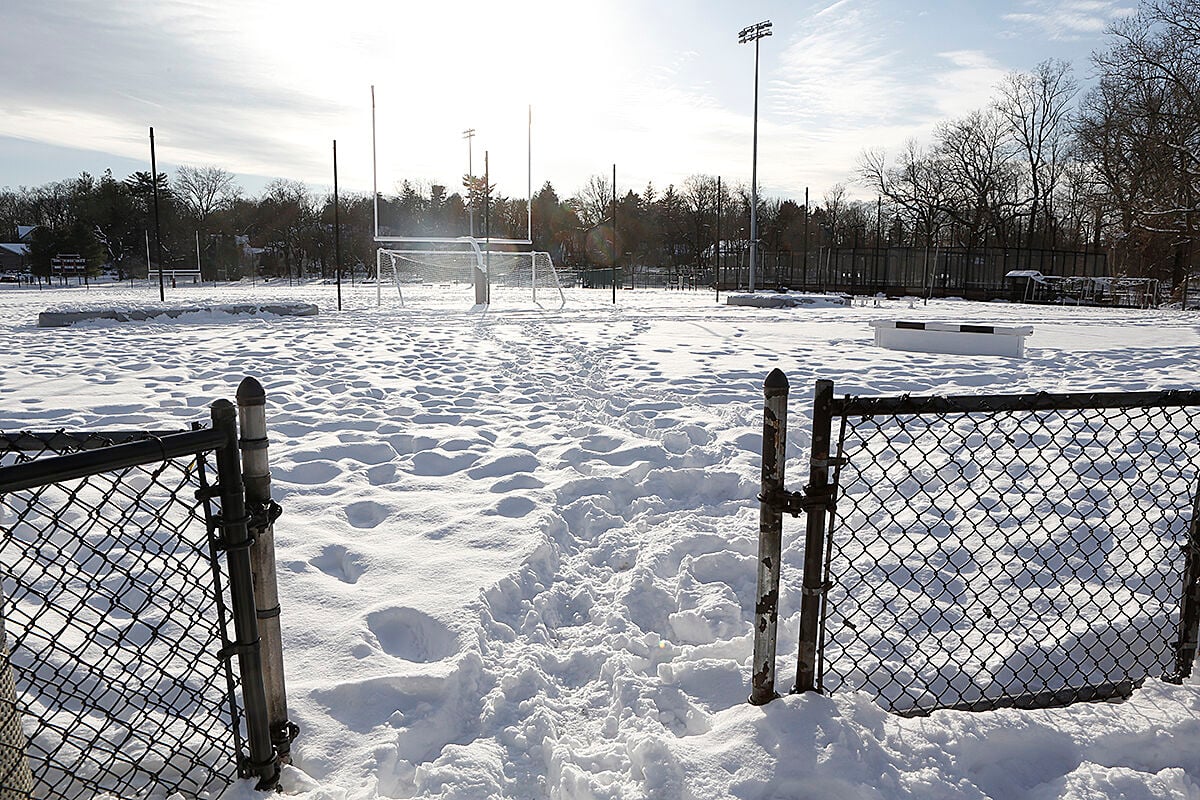 The Scarsdale High School track has been constantly blanketed with fresh snow this month. 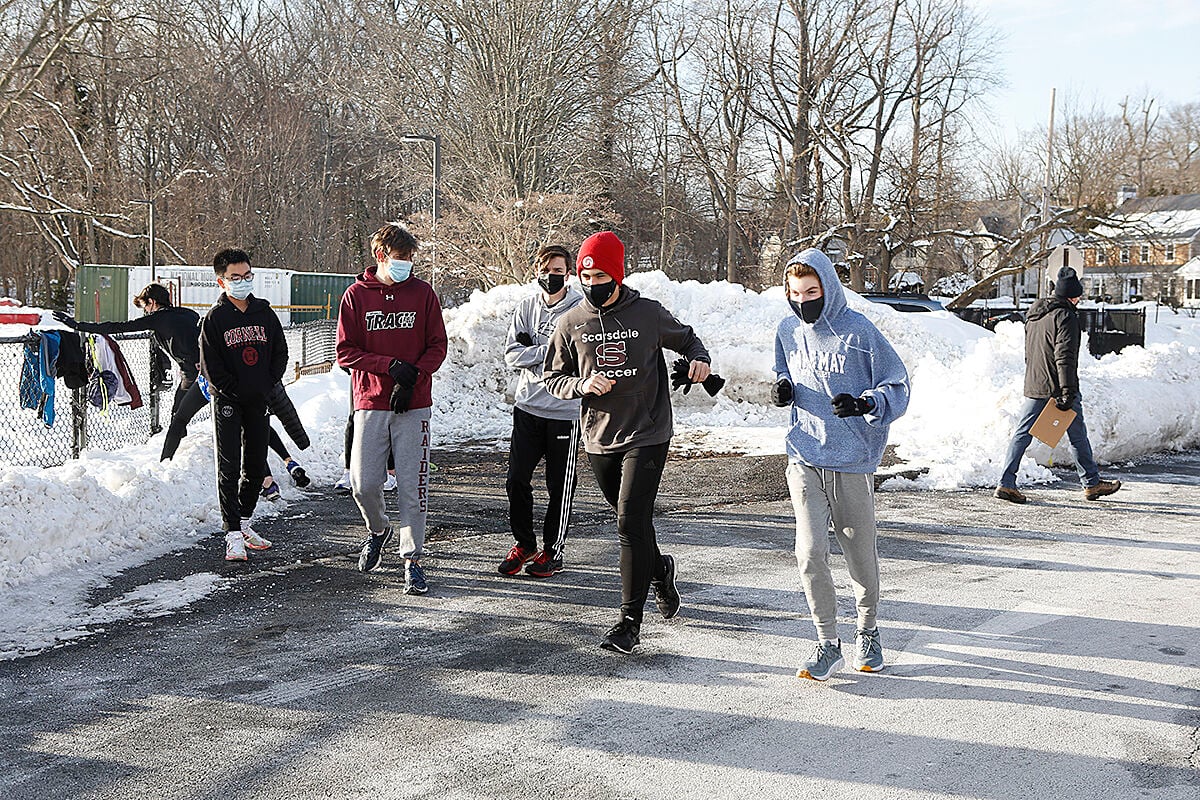 The Scarsdale track team works around the mounds of snow. 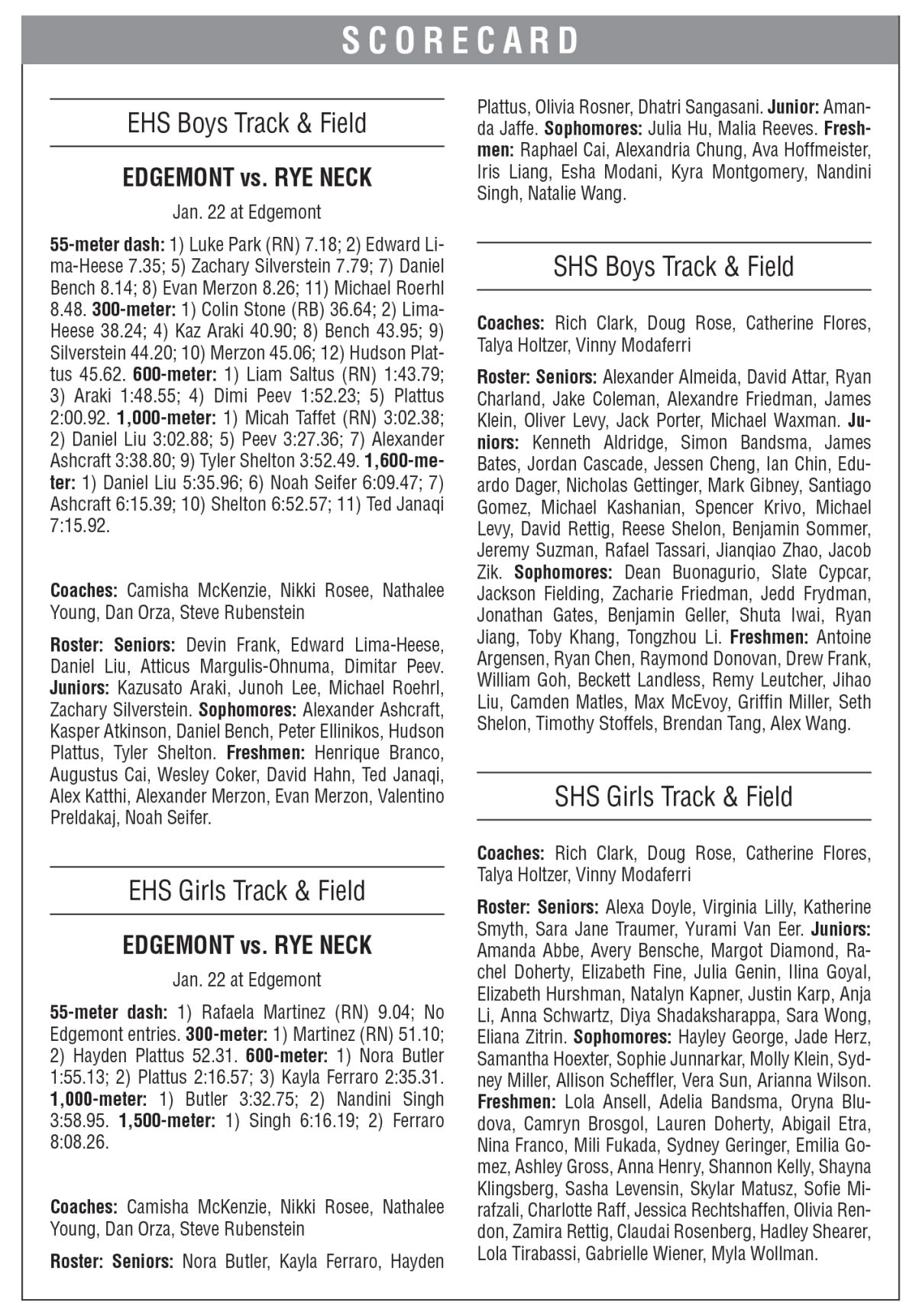 After a successful low- and moderate-risk fall sports season and with bowling, gymnastics, skiing and swimming/diving set to have postseason next week for winter, the only local sport to fall well below expectations so far this school year is winter or indoor track. With indoor spaces limited at schools, the Armory being turned into a COVID-19 vaccination center and the region getting pounded with multiple feet of snow since the last day of January, it cut short a season that had no choice but to rely on outdoor meets in the middle of the winter.

Edgemont actually got in one home meet on Jan. 22, but on Wednesday, Feb. 10, co-coaches Camisha McKenzie and Nikki Rosee announced they were shutting the season down. Scarsdale will return to work out next week after the vacation, and while there are still two meets scheduled, coach Rich Clark doesn’t see them happening as more snow is in the forecast.

Edgemont senior Nora Butler knew it was going to be a challenging season and that even when the Armory was originally planning to hold meets she knew many of her teammates weren’t going to be comfortable competing there.

The home meet against Rye Neck was small, featuring only races, no field events, but it was the real deal with FAT (fully automatic timing).

“When our coaches told us we’d have an outdoor meet, I think everyone was both grateful and dubious — after all, who’s heard of an outdoor winter track meet in New York?” Butler said. “The weather was something to worry about, but it ended up being a perfect day. Unfortunately, a snowstorm had to come soon after. Having one meet was better than nothing though, especially since some schools didn’t get to compete at all.”

Prior to the snow, Edgemont had the track, the turf field, the roads and part of the cross-country course for workouts.

“We had places to go,” Rosee said. “The tricky part is we didn’t have a place to stretch or warm up indoors. Then once the snow hit that eliminated all of our outdoor space. Then we were allowed to use the gym for a short amount of time and then once the high-risk sports were approved that eliminated that for us. It’s sad, especially for our seniors who didn’t quite get a season in. It was out of our control.”

Even when the snow fell, the Panthers were outside training. Though they are used to having some indoor space at the school and some weekdays at the Armory for practices, they are certainly conditioned to train outdoors in the cold.

“Over these past couple of months, the team has been working hard and training well through all of this snow and cold weather,” Edgemont senior Dimi Peev said. “Even though our official practices have come to an abrupt end, I am confident that team members will still train on their own time and work hard for the upcoming season.”

It wasn’t a total loss for the Panthers, who got some time together and solid training, too.

For Butler it’s the, “What if?” that will never get answered. “I think this season could have been something special,” she said. “Looking at the team, although small, it had a variety of strong and dedicated runners. I would have been excited to see some of the freshmen’s abilities if we were able to continue training and competing.”

Now many of the team members have their sights set on the spring season, which officially begins April 19.

“I hope that we can make the most out of our spring season,” Peev said. “I’m happy with the progress we made this winter season, especially with hurdling. Since I’m a senior, I was worried for the longest time that I would be the only hurdler left and there wouldn’t be anyone left, but new faces have shown up this year that I was more than happy to teach.”

Rosee hopes the team members do get out on their own and train, though she does hope to be able to begin some unofficial workouts prior to the official spring start date.

“We now have a big stretch of time when they’re not being held accountable,” Rosee said. “If they don’t work out as much as they need to they will lose their endurance and their strength. They’d be starting all over again. We hope to get them going sooner than April 19. Not everybody will show up, but the kids who have their heart in it will.”

Unfortunately for the Raiders, the conditions were the same on the other side of the Bronx River Parkway in Scarsdale. They know that last winter would have been perfect as it snowed only once and even better would have been moving winter track to the fall 2 season. Instead, they accepted a tough fate.

“Regarding our lack of facilities and meet venues, it’s been a challenge,” Scarsdale senior Jack Porter said. “However, some of our best team results in the past have come when we had no track and were running workouts on grass fields and roads. We’ve returned to our roots in this sense, and a lot of kids have made big progress.

“The lack of meets is harder, because it’s difficult to stay focused on a goal with no competition opportunities.”

One major thing those who do multiple seasons between cross-country, indoor track and outdoor track are not used to are long breaks in the action. The elite kids have a week or two off between seasons, others a few weeks. Having months off from practices and competitions is certainly new territory for many.

“I believe that the time between the seasons gives our runners an important break to heal or cross-train on our own,” Scarsdale senior Alexa Doyle said. “The break is our time to reset both mentally and physically and prepare for the season ahead. However, we will be faced with new challenges during this extended break. I think that keeping ourselves motivated and checking in with our teammates and their progress will be important.”

All indications thus far is that spring track — which was canceled last year during the beginning and the height of the pandemic — will be a much better opportunity for the Raiders outdoors as vaccination rates go up and positivity rates go down around the region.

“I think it’s important to have meets this spring because there are a lot of kids who haven’t had a chance to race since last winter,” Scarsdale senior Alexandre Friedman said. “People are hungry to get huge personal bests and see their training pay off.”

Clark has been coaching cross-country and track since the 1970s and he’s certainly never seen a season like this in his life. Normally the “relentless fuselage of snowstorms” would be a minor hiccup for the team. This year it cost them another season.

“Maybe some kids wouldn’t agree with this, but I do know many of the distance runners, yes, they would like to race, but I think they are resigned to it and their minds are set to get ready for spring,” Clark said. “They’re hopeful and we hope there will be meets in the spring and it will be much easier without the snow or without the weather. To their credit they haven’t stopped training. They’ve been working hard, the sprinters, the middle distance, the distance and the field team.”

Over the span of a year, the track team has lost two seasons. Even in that reimagined cross-country season the team had a chance to shine and both the boys and girls did just that.

“They showed their training was serious and they were focused and the same is true for indoor,” Clark said, who added, “You can’t show up April 19 and expect to be good for that short season. You can’t pick it up. You have to be priming the pump so to speak.”