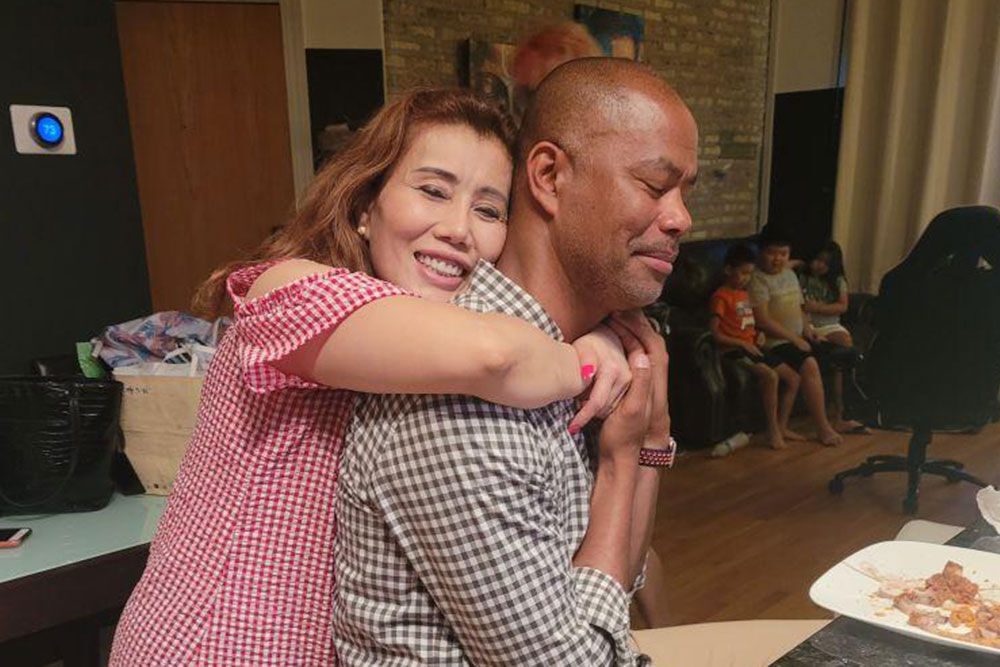 Canh Oxelson with one of his half sisters in Chicago. 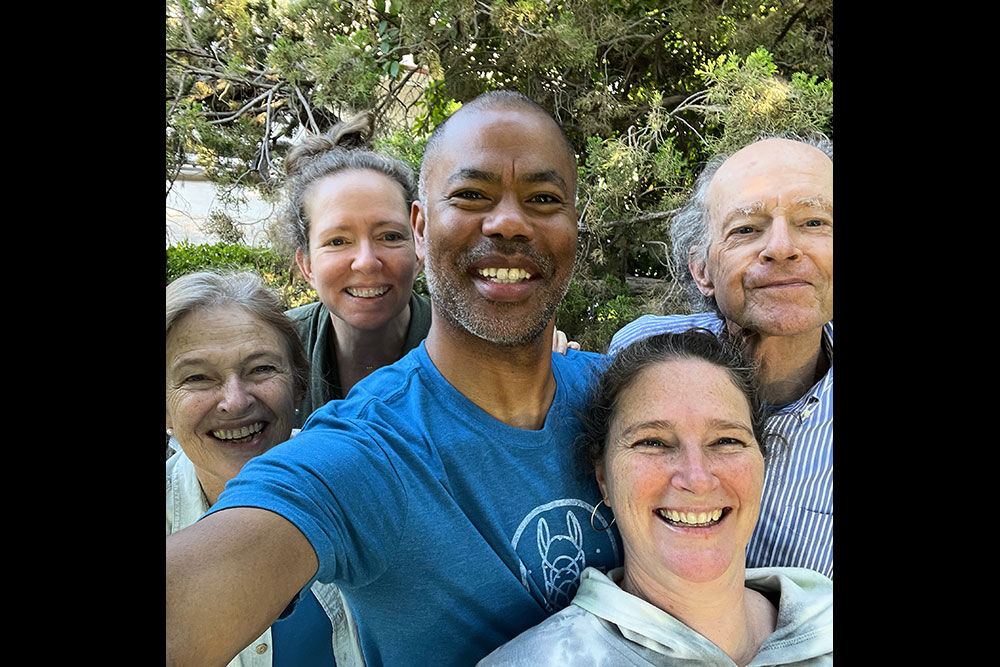 Canh Oxelson with his adoptive parents and sisters. 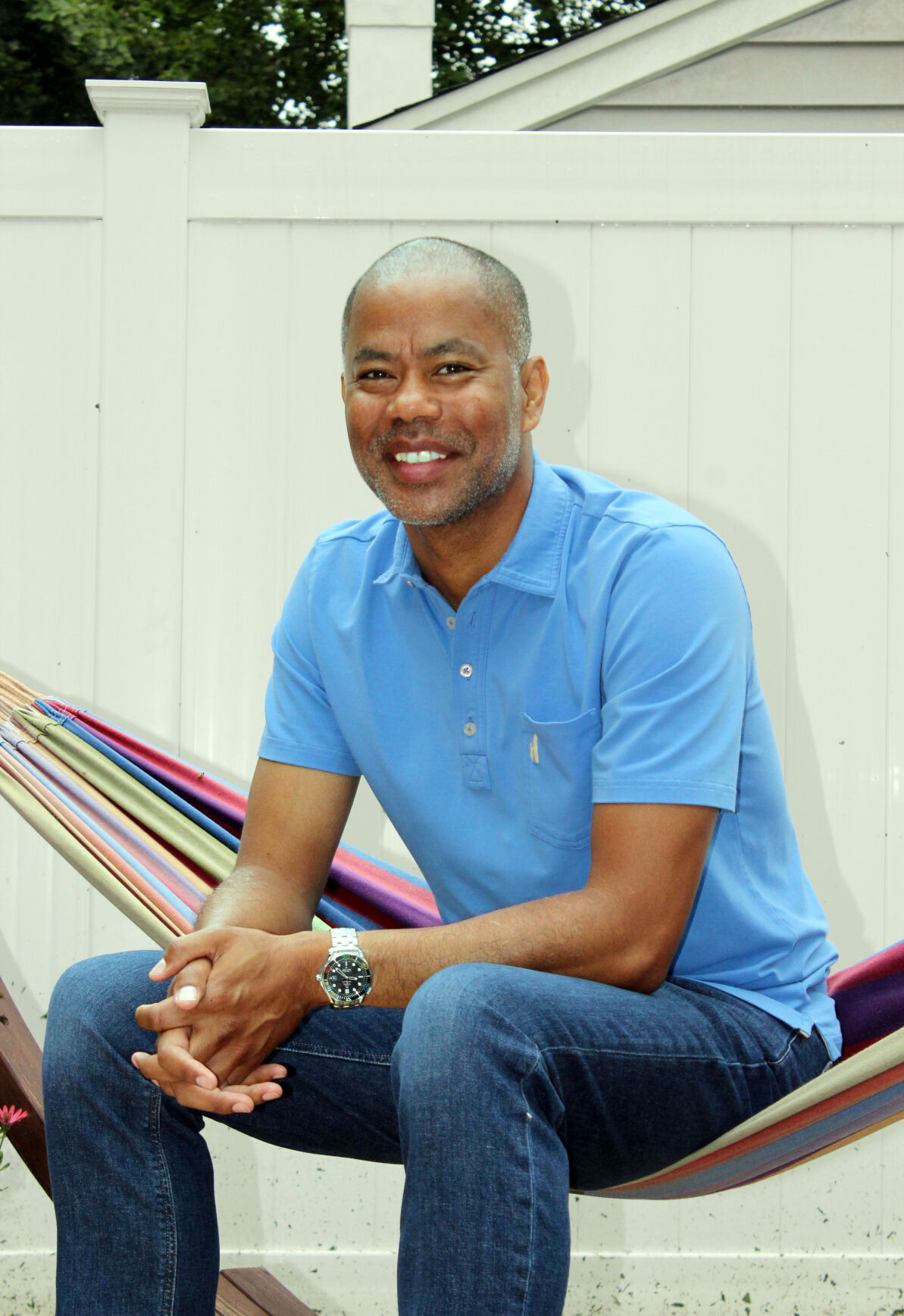 Canh Oxelson at home in Hartsdale 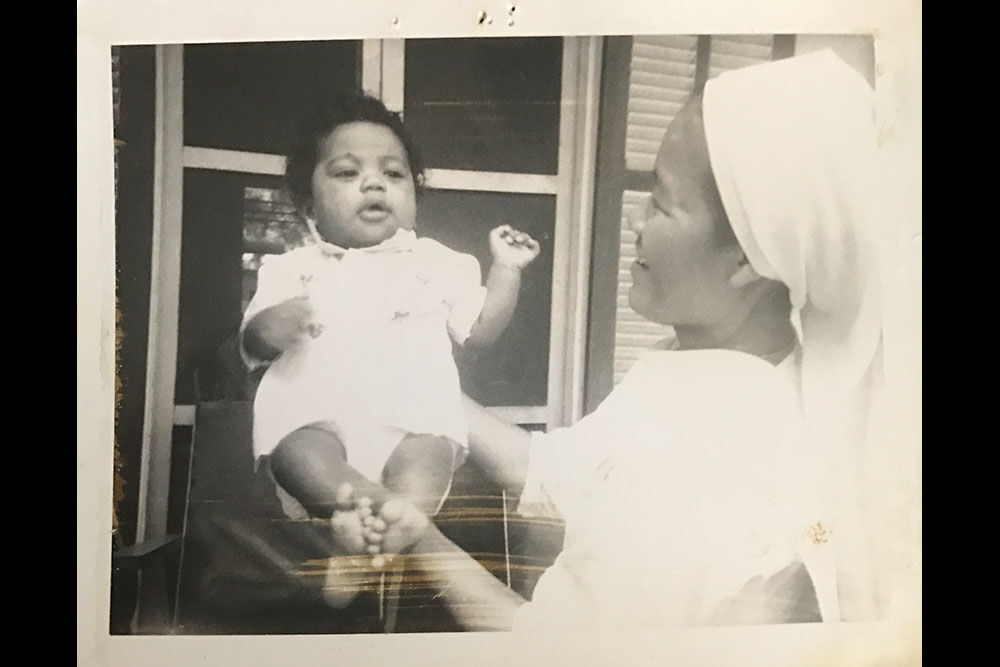 Canh Oxelson as a baby in an orphanage in Vietnam. 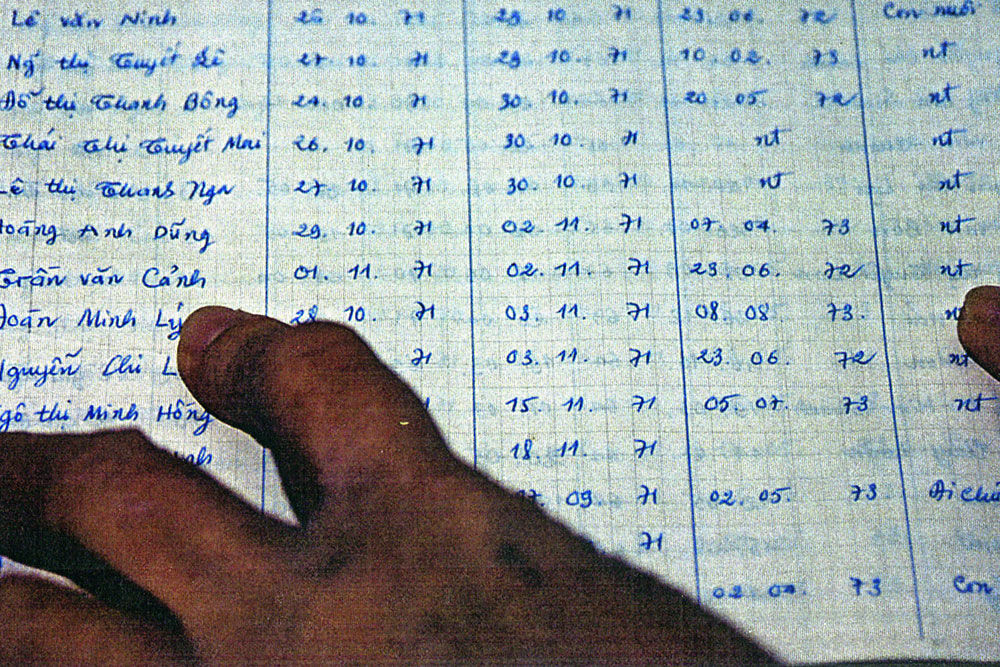 Last week, Hartsdale resident Canh Oxelson sat in a living room in Chicago and had a meal with his family. For many families, having a meal together is a regular event. For Oxelson, this meal marked a reunion with his biological family, after having been adopted nearly 50 years ago.

Oxelson was born in Vietnam in 1971, during the height of the Vietnam War. His father was an African American soldier, and his mother a Vietnamese woman. His mother took him to an orphanage, where he remained for 10 months, before being adopted by a couple in California, one of whom is Swedish, the other of Irish descent.

Even as a child, he wondered about his birth family, and this curiosity manifested in his love for swimming.

“Like a lot of top swimmers, you think about going to the Olympics. But for me, I kept thinking if I went to the Olympics and I won a gold medal or something there’s a chance my birth parents would actually see that story,” he said. “You know how NBC likes to do all these different background stories on the athletes as they are preparing to compete? I just thought that would be a great way for my birth parents to actually find me. If I became an Olympic medalist and they saw the story on TV and thought, ‘Oh, my gosh, that’s our son.’”

From the age of 6, Oxelson swam competitively. He was recruited to swim in college, but instead decided to go to the University of San Francisco on an academic scholarship. Without swimming, he began to question his identity.

“At some point I had to retire from swimming and I think at that point I started thinking, well now that I’m no longer a swimmer I can’t claim that as my identity,” he said. “So then I really started thinking, if I’m not a swimmer, then who am I? And that’s when I finally decided, you know what, I think I need to go back to Vietnam.”

When he brought this up to his adopted parents, they responded with their support.

“My parents said, ‘Hey, well we have been saving money since you were a child thinking that someday you might want to go. We didn’t want the finances, the expense of it, to keep you from going. So we’ve saved money for you to go.’”

Oxelson figured the trip would be an emotional experience for him, and decided to take his parents and sisters along with him. In December of 1988, when he was 27 years old, Canh and his family went to Vietnam.

Although he didn’t meet his mother, the trip had a profound effect on him and he felt a connection to her as he walked the streets of Vietnam. His visit to the orphanage where he spent 10 months as a baby also seemed to have an effect on the nuns who had taken care of him.

“I think they found it almost inspiring because these are nuns who have basically dedicated their lives to kids and helping and educating kids ... so to have me come back after all those years was a really big deal to them,” he said. “It’s almost like they got to see … this is why we’ve sacrificed so much to help these kids.”

Oxelson’s experience visiting the orphanage and meeting the nuns who took care of him inspired his career choice.

“I had already been in education, but I was really motivated after that experience of going back to Vietnam to really go further,” he said, explaining that he enrolled in graduate school at Harvard and got a master’s degree in educational policy because he really wanted to help young people.

Currently, Oxelson is executive director of college counseling at Horace Mann School in the Bronx.

He said his curiosity and desire to learn more about who his birth parents are affected him long after his trip to Vietnam. He has met other adopted children from Vietnam, and has pursued paths that could lead him closer to discovering his family.

“One of [my friends] had started a nonprofit that basically provided DNA tests to women in Vietnam who were looking for their babies that had been given up for adoption,” he said. “This friend of mine sent me a DNA test and said, ‘You should take it because maybe you’ll find your birth mother in Vietnam.’ ”

Despite his interest in finding his family, Oxelson was hesitant to take the test.

“I had the test for a whole year and I just could not get myself to take it. It was sitting on my coffee table,” he said, noting that he was living in Los Angeles at the time.

“I was fearful that I wouldn’t find anything, so here I was going to invest this emotional energy in taking the test and trying to find a biological family, and what if the test came back and I wasn’t able to connect with anyone? So trying to manage my expectations if I take the test and I don’t get any information — that would really be hard for me,” he said.

Another reason for his hesitation was the possibility that if he took the test, and did find a family, would he feel pressured to actually meet them and get to know them?

After a job change took him from California to New York, Oxelson finally reconsidered taking the test. He thought it might have less impact on him while in the process of moving and starting a new job in New York.

So he took the test, and a couple of months after moving to New York, Oxelson received a message from a woman who turned out to be his fifth cousin.

“I had never met someone that I had a blood relation to,” he said. “When she and I met, we had a great time getting to know each other, but when you think about it, that’s still a very distant relative. So while it was really cool to meet someone I was related to, it was not a very close relative.”

Eventually, Oxelson took another DNA test through 23andMe, and to his surprise, found relatives closer than he imagined possible.

“I got a message from somebody [named Tina] saying, ‘You and I are related but I’ve never heard of you. How are we connected?’ So we were trying to figure this out. The DNA had us listed as cousins. But based on what she knew about her family, it didn’t make sense,” he said. “Then what we realized was the amount of DNA that we had in common could have made us cousins or essentially half relatives. Ultimately what we figured out is that this person I thought was a cousin is actually a half niece, which means her mother is my half sister.” That’s when they realized her mother was Oxelson’s half sister, and her grandmother is actually his mother.

Tina lives in Chicago along with her two brothers and her mother, who is Oxelson’s half sister. After more than a year of talking to Tina over Zoom and nearly 50 years apart, Oxelson flew to Chicago last week to meet members of his family.

“All I experienced while I was there was open arms. They were so curious about my life and getting to know me and that was an awesome feeling,” he said. “Whatever fear I had about being rejected by this birth family just dissipated almost immediately.”

While he was there, his family called his mother, who still lives in Vietnam, but Oxelson was unable to speak to her. Although he has reconnected with many members of his family, his mother remains unaware of his success in finding her.

He said one of his sisters remembers their mother being pregnant with him but, when the sister asked about it, their mother was unforthcoming.

“All they were able to confirm is that she doesn’t want to talk about it, so she doesn’t know that I’m alive. When they got her on Facetime, while I was in Chicago, they were having a conversation with her, but I could not,” he said. “So I watched her and it was the first time I’d actually seen my mother ... and heard her voice.”

The next step for Oxelson and his family is to figure out how to tell his mother that her son is alive and wants to reunite.

“She’s 81 years old … and had I had a conversation with her yesterday over Facetime, I just don’t know how she would have reacted to that. It’s one thing to know that your child that you gave up 49 years ago is still alive. It’s another thing to know that not only is he still alive, he’s sitting in your daughter’s living room. I’ve come a long way on this journey of looking for and finding my birth family but there’s still a ways to go.”

In the meantime, Oxelson is developing relationships with his newfound family members. After he returned to New York from Chicago, he described a feeling of sadness felt by the whole family.

“My sister was texting me yesterday saying she was sad that we’d only had a short period of time to spend with each other and my niece was texting me saying the same thing ... it all happened so fast,” he said. “We’re really looking forward to the next time we can get together whether that’s in New York or Chicago. We talked about going to Vietnam together and actually going to see my birth mother together.”

During his trip to Chicago, Canh was asked by his oldest nephew if there were any questions he would ask his mom if he had the chance to talk with her.

“I have thought about it a lot. I think he was expecting me to ask her, ‘Why did you give me up for adoption?’ But to me that was actually a pretty straightforward thing,” he said. “I understand why she would need to do that — in the middle of a war having a child who is obviously half American would be difficult.”

When Oxelson eventually meets his mother, he knows exactly what he wants to say.

“The first thing I would do is thank her, and say, ‘I can’t imagine having to make the decision about whether or not to keep a child or give the child up for adoption.’ I want her to know that however she felt about the decision back then or even today, in my mind it was the right decision,” he said. “It was a great decision because I had so many great opportunities growing up in a family that traveled [and] prized education and learning … So that’s not really a question I’d ask her. It’s more an expression of gratitude for the difficult decision that she made.”