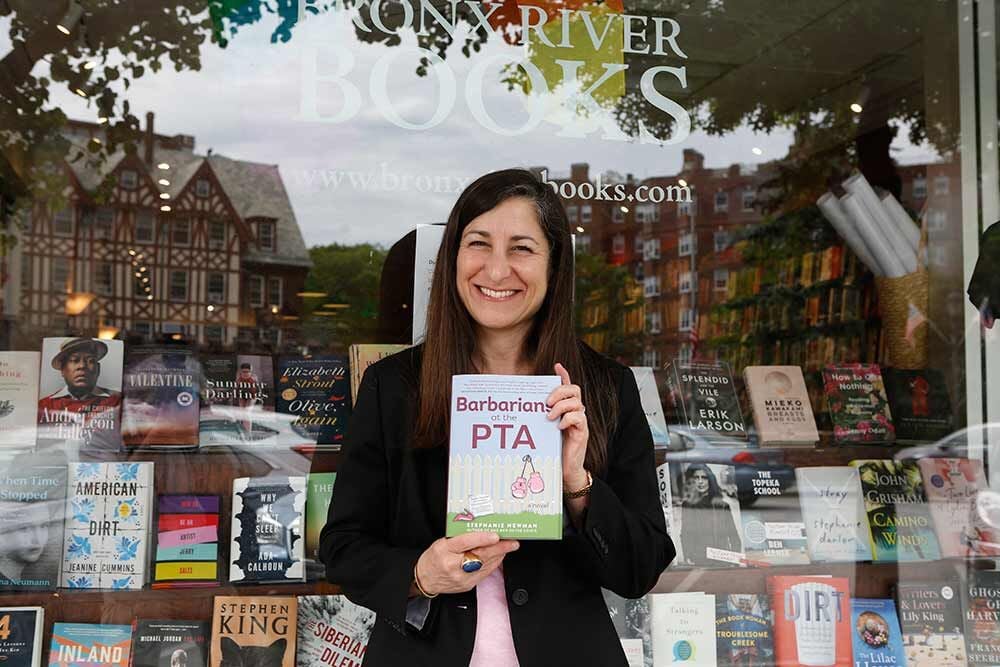 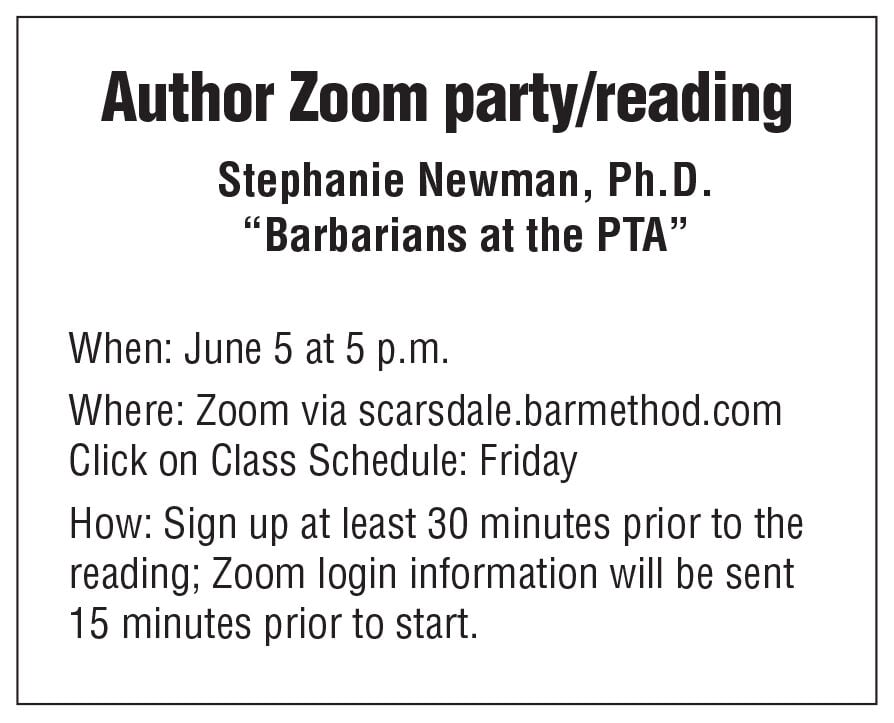 Moving from the city to the suburbs can be a big adjustment — and not always a smooth one. It’s something psychologist and writer Stephanie Newman, Ph.D., understands extremely well. She’s captured this major life event, in all its pain and hilarity, in a new novel, “Barbarians at the PTA.”

To celebrate the publication of the book this week, The Bar Method Scarsdale is hosting a free Zoom party and reading by Newman on Friday, June 5, at 5 p.m. The first five people to register will receive a signed copy of the book. Scarsdale merchant Bronx River Books is offering members of any book groups a 10% discount on the title; call 914-420-6396 for information.

From the first chapter of Newman’s book, you’re ushered into the world of city dwellers Victoria, a psychologist and single mom, and Rachel, her smart and sensitive 10-year-old daughter. When Victoria’s plans for marriage fall through, she yearns for a new chapter of her life to begin. An opportunity to turn the page soon presents itself: a house becomes available in the suburb of Mayfair, an affluent enclave boasting a top-tier school system. With that, mother and daughter bid adieu to high rises and subways and say hello to split-level houses and backyard barbecues.

Yet all is not as cheery and pristine as the picket fences surrounding Mayfair’s homes. “Victoria and Rachel encounter a different sort of life than they had in the city,” Newman said. “[The story is about] how they react. There’s some humor, and there are some poignant moments [relating] to the girl’s stuff and to the mom’s stuff, the cliques and the cyberbullies.”

While the book’s title is intriguing, “I’m not picking on PTA moms,” Newman, a nearly-13-year Edgemont resident and mother of two, insisted. “I’ve volunteered at schools for years, and I respect the people who do that with their time. They contribute a lot. It’s just a very handy way to describe that there are going to be sandbox wars, and not only [between] the kids. If you say it’s at the PTA, people immediately get it.”

People may also infer, rightly, that the book offers much to savor, ponder and laugh about. “It’s supposed to be very light and fun, even though I wouldn’t say bullying is the most fun topic right now or any time, don’t get me wrong,” Newman said.

Indeed, Victoria’s daughter, Rachel, encounters some cyberbullying and real-life exclusion, “like who’s on the team, who gets to be on the team — you know, typical stuff that might go on in an elementary school or a junior high school. Who’s at the party, who’s in the carpool,” Newman explained.

At one point, an anonymous cyberbully asks Rachel who is not overweight, “What’s your BMI, one thousand?” referring to her body mass index, a measurement of body size. “It’s hard, you know, when people insult you,” Newman said.

As Rachel faces down these challenges, Victoria encounters some conundrums of her own, especially how to help her daughter without becoming a helicopter parent. “We all get involved,” Newman observed. “We all don’t want our children to be in pain. It’s very hard when your child suffers — it’s very hard to step in and then step out again. People can over-identify. So [Victoria] has to learn how to navigate a situation while knowing that her daughter is separate from her… She has to figure out a way to either not get involved, or help her child with the understanding that [with] empathy, where you step in, you also step out of the other person’s shoes.”

Though the book doesn’t have overt lessons, there are themes to consider, Newman said. “For a lot of moms, and everybody has felt this, if your primary source of identity is parenting, it’s very hard. I tell people it’s really good to have something else that they focus on, whether they love to garden, whether they love to volunteer at assisted living, whether they work, write, whatever they do, it’s just something else where it’s not just that you’re only involved with the family and parenting.”

Newman writes from a place of wisdom, both as a psychologist and a parent. But she emphasizes the book is in no way autobiographical, nor is it based on her patients. “Have I ever had a kid get disappointed? Of course I have. Do I work in practice and talk to a lot of people and hear different things? I do. [But] this is just a way I chose to tell a story, you know, a fictional thing,” she explained.

Her own love of fiction started in childhood. “I always read a lot from the time I was little,” Newman said. “I read ‘Little Women’ like 700 times; probably everyone did. I always loved ‘Marjorie Morningstar’ by Herman Wouk.” Her other literary influences include everyone from Thackeray to Liane Moriarty. “I love big, epic stories about families and generations and social satire,” she added.

Newman herself is the author of three books including “Barbarians.” Her previous two titles, “Money Talks,” about the incursion of money and finances into psychologists’, psychotherapists’, and psychoanalysts’ practices, and “Mad Men on the Couch,” a collection of fictionalized analyses of the characters of the TV series “Mad Men,” were published in 2011 and 2012, respectively.

As for her latest work, Newman hopes people come away from it wearing a smile — “it’s supposed to be funny,” she said. But she would also be thrilled if it becomes part of a bigger conversation, one about “how things are in the schools for the kids, for the moms, and what it’s like with subjects like teens and social media, or parenting to the nth degree,” she explained. “I have empathy for all — all parents, all moms, and our struggles.”