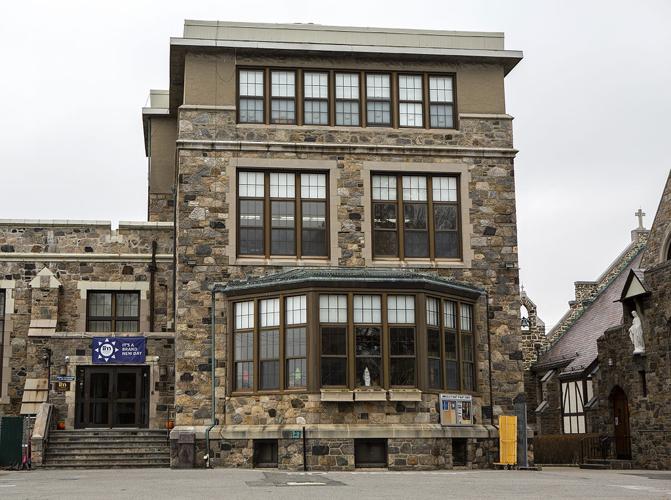 Immaculate Heart of Mary School on Post Road where Edwin Gaynor was a coach and physical education teacher. 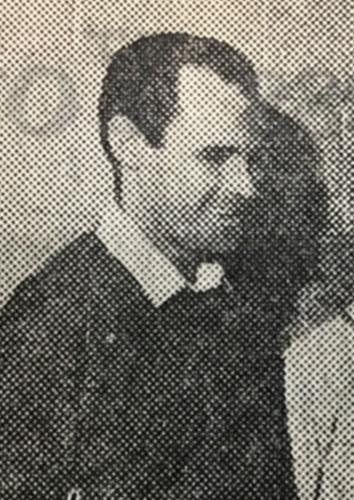 Following five lawsuits filed in Westchester County Supreme Court in November accusing a former sports coach and physical education teacher at Immaculate Heart of Mary School of sexually abusing five students in the 1960s, eight more suits were filed in the last three months against IHM, the Archdiocese of New York, and Edwin “Ted” Gaynor, who is accused of sexually abusing students between 1962 and 1969.

Gaynor, who according to court documents lives in Ossining, allegedly admitted in a Dec. 12 letter sent to the law firm representing a defendant known as R.L., that he molested R.L. in 1967.

According to court documents, R.L alleges he was molested after being asked to sit on Gaynor’s lap in his office. According to his lawsuit, R.L. told his parents about being molested by Gaynor after other local parents overheard one of their sons call his brother a “mo,” a phrase short for “molester” that the kids told their mother they used to refer to Gaynor.

In the letter sent to Lowey Dannenberg, P.C. — the White Plains firm that is representing the 13 accusers — Gaynor marked up the complaint — circling, highlighting and crossing out sentences. In the margins Gaynor wrote, “I was sitting at my desk with the telephone on the desk. R.L. wanted to call home and he sat on my lap to use the phone … and there I molested him.”

In Gaynor’s physical alterations to the complaint, which was originally filed Nov. 19 in Westchester County Supreme Court in response to R.L. citing trauma that continues to haunt and disturb him due to the abuse, Gaynor highlighted “continues to haunt and disturb him” and wrote in the margins, “I very much doubt that although I’m sure he was shocked and disappointed in me.”

In the original complaint in February 2009, Gaynor allegedly sent a letter to R.L. at his childhood home — where R.L. was still living. According to the lawsuit, Gaynor’s letter stated, “I realize you might just ignore this letter. I don’t know what your feelings are, I only know you were a fantastic kid.” The letter also included copies of pictures, the suit claimed.

In a letter sent Dec. 12 to Lowey Dannenberg, P.C., Gaynor allegedly wrote that he wrote to R.L. in 2009 in hopes that R.L would reply and “it would be the beginning of forgiveness and our getting back together in friendship as we enjoyed before my abuse 42 years before.”

In a letter dated Dec. 1 to Justice Steven Jaeger, Gaynor requested suggestions on how to proceed with the lawsuit involving R.L. The letter stated that he is 84, was hospitalized this past April for a stroke, suffers from chronic fatigue that requires him to spend 17 hours in bed, is hard of hearing, cannot afford a lawyer, has acid reflux, has no computer and owns a car that is 25 years old.

“Please realize I am writing this not to try to invoke sympathy but to explain at my age the limitations I have in this complicated situation I find myself in,” the letter said.

On Jan. 27, an attorney from Rivkin Radler LLP — the firm representing the Archdiocese of New York — requested Gaynor’s scheduled Jan. 30 deposition be suspended until a determination could be made regarding Gaynor’s competency to testify.

An attorney from Traub Lieberman Straus & Shrewsberry LLP — the firm representing Immaculate Heart of Mary Church — called for the courts to quash the plaintiff’s notice to take Gaynor’s deposition.

According to court documents, Gaynor wrote two other letters to Lowey Dannenberg, P.C. on Dec. 12 — in one letter he wrote, “I was guilty of molestation.”

In the other letter Gaynor denied the molestation allegations made by Charles Booth.

“I don’t even know who this kid was. I don’t recognize the name,” the letter stated. “As usual, claims of serious psychological injury, physical problems, emotional distress and lasting damage, an obvious attempt to get large amounts of money in a lawsuit. This whole thing appears to be totally false.”

Booth — a Florida resident who previously lived in Scarsdale and attended Immaculate Heart of Mary School — alleges Gaynor sexually and emotionally abused him when he was 8 to 9 years old, according to the lawsuit.

Booth was an avid athlete and involved in sports at the school and looked up to Gaynor as an authority figure and sports leader. According to the suit, Gaynor invited Booth into his office where the boy was molested while sitting on Gaynor’s lap.

According to court documents, one anonymous plaintiff alleges Gaynor molested him weekly for three years, alleging more than 100 incidents between 1963 and 1966. The plaintiff was between 8 and 11 years old during the alleged abuse. According to court documents, once Gaynor saw the plaintiff with his father — who was the coach of the adult boys’ Catholic Youth Organization (CYO) basketball team — the abuse stopped.

Another anonymous plaintiff, who currently resides in North Carolina and had previously lived in Scarsdale and attended IHM, alleges Gaynor abused him between 1964 and 1965 when he was 9 to 10 years old. According to court documents, Gaynor molested the plaintiff throughout fourth and fifth grade while sitting on his lap in Gaynor’s office chair. Allegedly, Gaynor would begin by tickling the plaintiff and would use a handheld vibrator. According to court documents, while roughhousing with his older brother, their mother overheard the commotion and asked what the boys were talking about. The plaintiff’s brother told their mother what Gaynor was doing to them. The boys’ mother pulled them both out of school and sent them to public school. The plaintiff said later in life he dealt with problems related to alcohol and that he feels “enormous shame, alienation and estrangement” due to the alleged abuse.

According to court documents, a plaintiff who currently lives in New York alleges that Gaynor sexually abused him and physically abused him when he resisted Gaynor’s alleged molestation. The plaintiff alleges that on one occasion he was able to squirm away from Gaynor’s grip and in retaliation Gaynor and another individual would force the plaintiff into a rectangular equipment footlocker, and lock him in it with the lights off for 20 to 30 minutes. Reportedly, one day while the plaintiff was wrestling with his younger brother and they called each other “mo-ach” — a combination of molester and coach — their mother overheard and asked what it meant. The boys said they were referring to coach Gaynor and told her about what he did to them.

Another anonymous plaintiff alleges that Gaynor sexually abused him six times over two years when he was 7 to 8 years old. According to court documents, the plaintiff, who currently lives in New York, alleges that after he had surgery at age 7 in 1962, Gaynor took advantage of him. According to court documents, Gaynor would use a handheld vibrator and molest him through his pockets. In one instance, the plaintiff alleges that he was able to escape off of Gaynor’s lap and that Gaynor retaliated and acted “vindictive, temperamental and mean towards [the] plaintiff.” Gaynor reportedly lived in the same building as the plaintiff’s grandmother on Brook Street and he would occasionally see Gaynor in the building. The plaintiff “would suffer extreme anxiety, fear and depression when in his grandmother’s building.” The plaintiff spelled out in court documents that boys would talk openly about Gaynor’s alleged molestation and that the Monsignor at the time “did not acknowledge that it was happening even though it was not a secret.”

According to court documents, another plaintiff who currently lives in New York alleges Gaynor abused him between 1967 and 1968 when he was 11 or 12 years old. In one alleged instance, the plaintiff was slow to changing back into his school uniform in the locker room when Gaynor approached him and asked if he needed help tying his tie. Gaynor then sat on the locker room bench and pulled the plaintiff onto his lap and began molesting him. According to court documents, the plaintiff leapt up and screamed at Gaynor, telling him that he knew what he was doing and that he would tell his father and contact police. According to the plaintiff’s recount in court documents, Gaynor said, “You know what will happen if you open your mouth and tell? I will tell everyone it was you and you’re a liar, your family will be embarrassed,” adding that if the plaintiff spoke about the abuse Gaynor would see to it that the student be sent to a reform school. The plaintiff never told his parents and brothers, but alleges that the Monsignor and the nuns knew about Gaynor’s abuse.

Another anonymous plaintiff alleges that Gaynor sexually abused him when he was 14 to 15 years old between 1985 and 1986, the most recent abuse to allegedly take place compared to the other 12 lawsuits. According to court documents, the plaintiff played basketball in the fall and baseball in the spring in the CYO after-school program, at IHM, in which Gaynor was the assistant coach for both teams. According to court documents, Gaynor saw “vulnerability” in him as he was going through a hard time at home and at school. Gaynor would find ways to be with the plaintiff, such as in a room in the back of school, a school office or in Gaynor’s car, and he would often offer to drive the plaintiff home, even though the plaintiff lived just three blocks away. In one instance while driving the plaintiff home, Gaynor allegedly began massaging the plaintiff’s inner thigh. The plaintiff quickly got out of the car and ran into his house.

Kevin Swayne, who currently lives in New York and was a student at IHM, alleges that Gaynor sexually abused him when he was approximately 8 years old from 1964 to 1965. According to court documents, “Gaynor’s behavior was known and knowable at IHM.” Swayne believes that Gaynor might have also molested his older brother, who died at age 54 after living a destructive and high-risk lifestyle.

Quentin Durning, who currently lives in Japan, alleges that Gaynor molested him between 1966 and 1967. According to court documents, Gaynor would coax Durning to sit on his lap and then combed his hair. Gaynor would allegedly untuck and retuck Durning’s shirttails and would molest him through his pants pockets.

The Archdiocese of New York did not respond to a request for comment by press time.