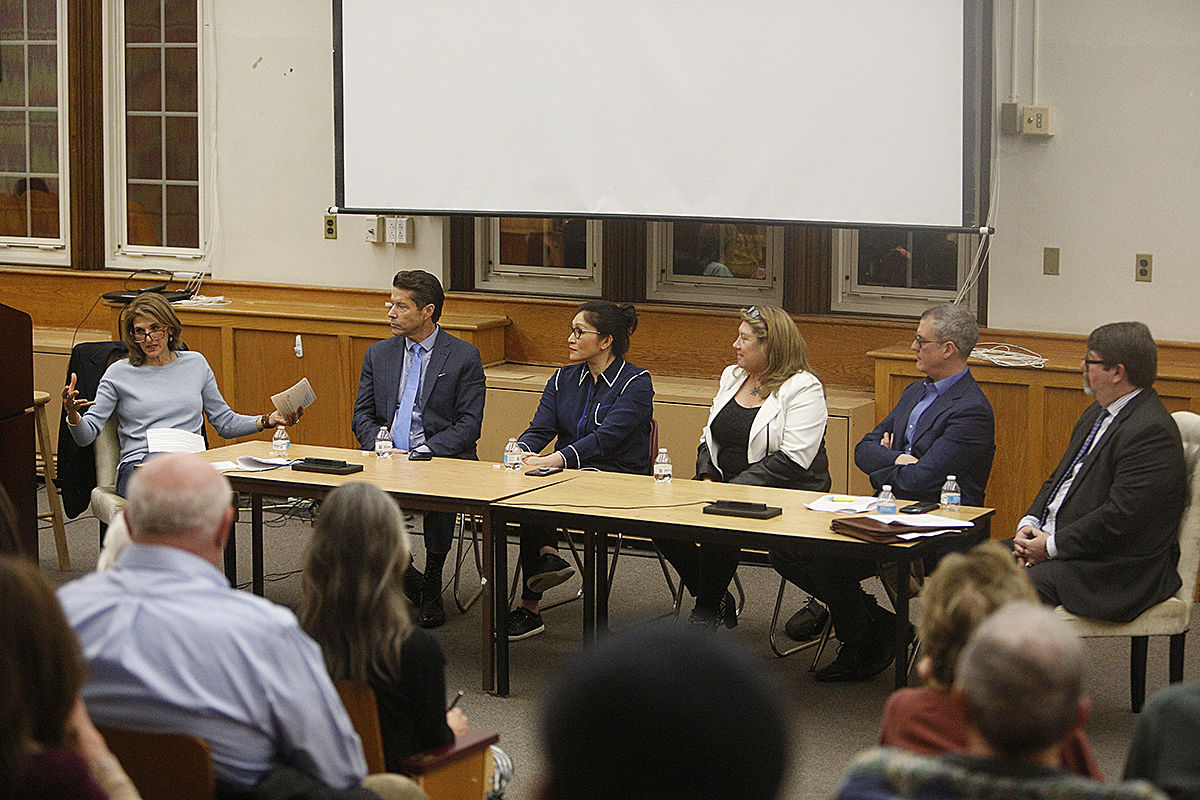 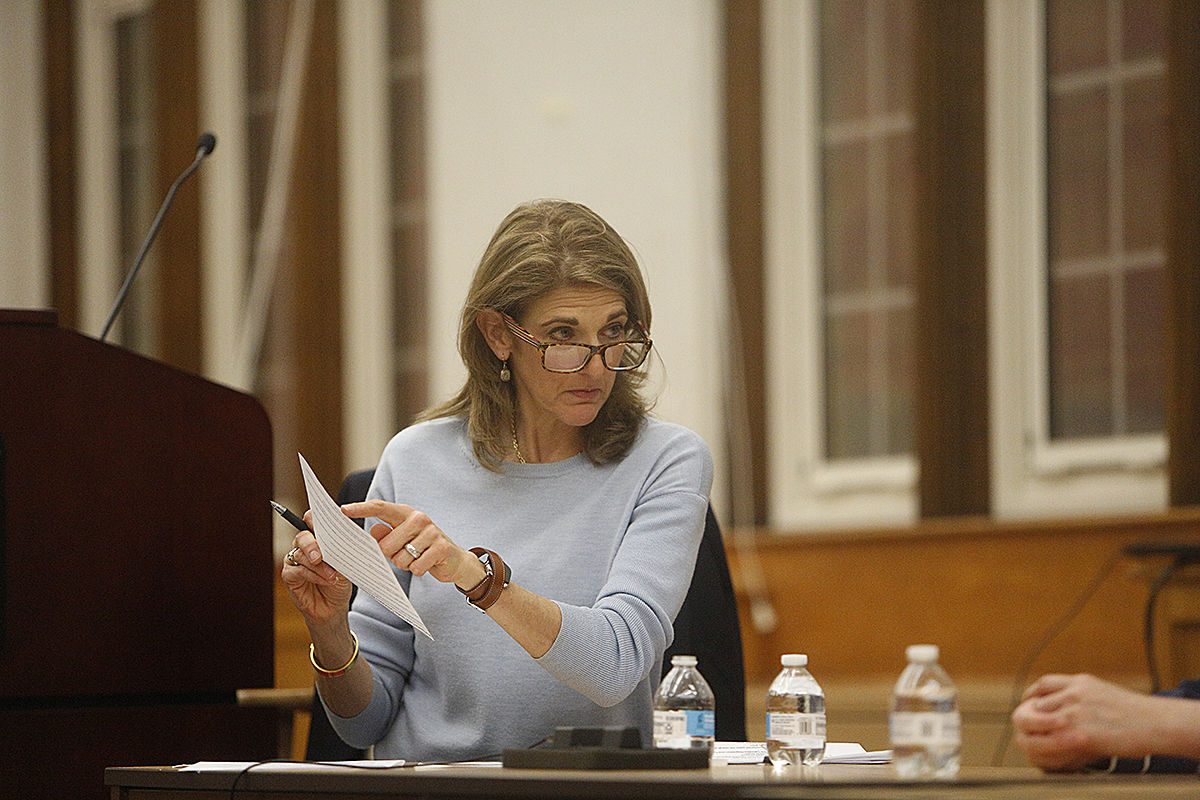 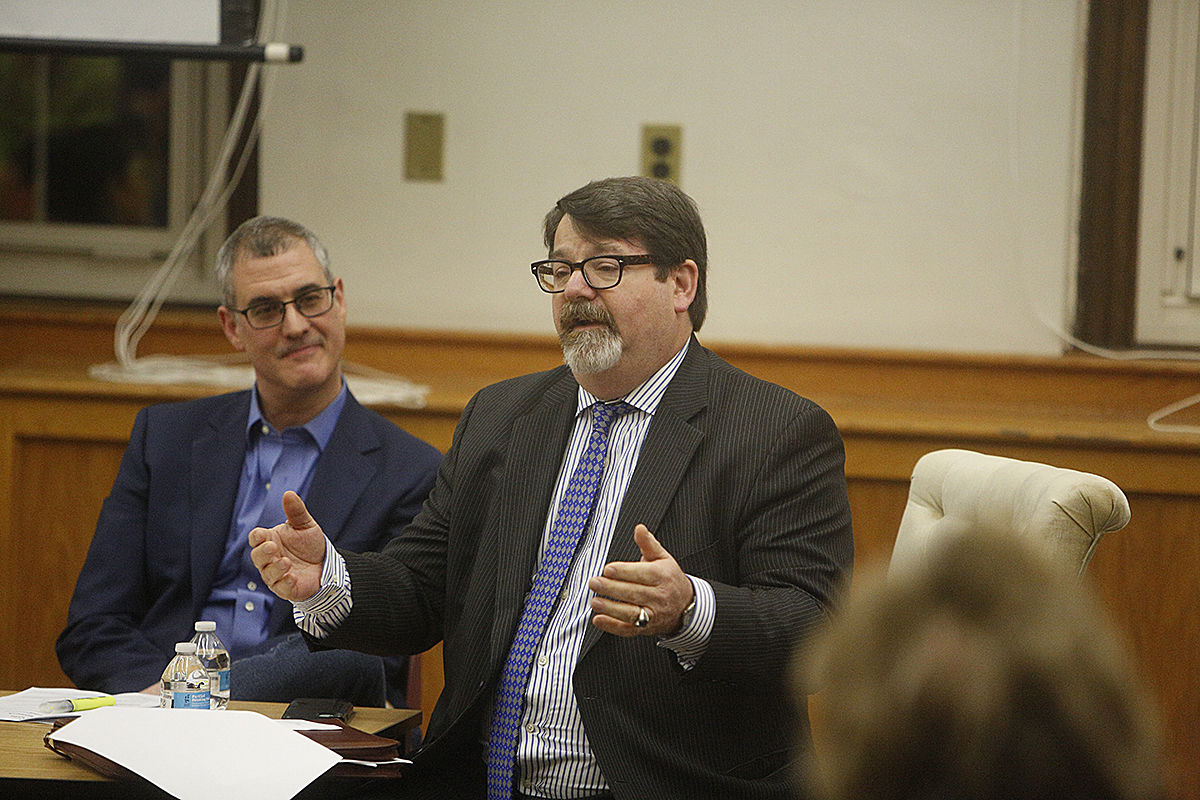 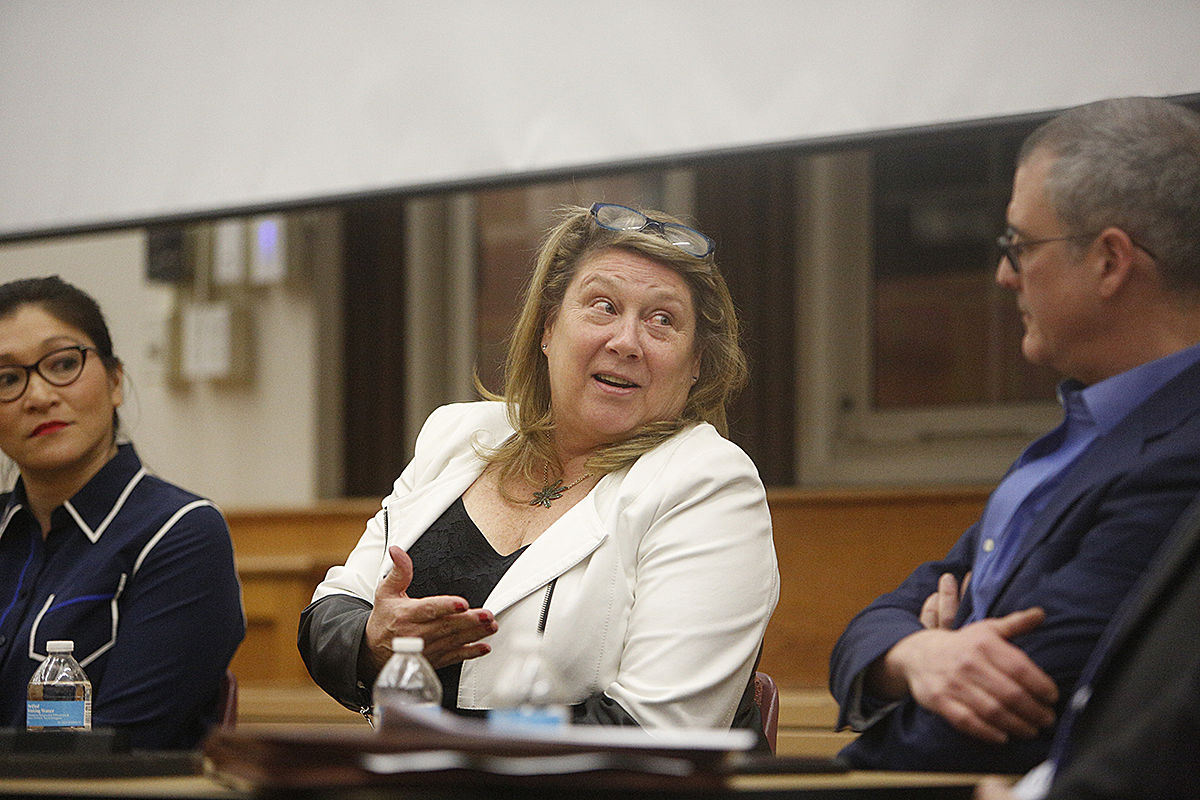 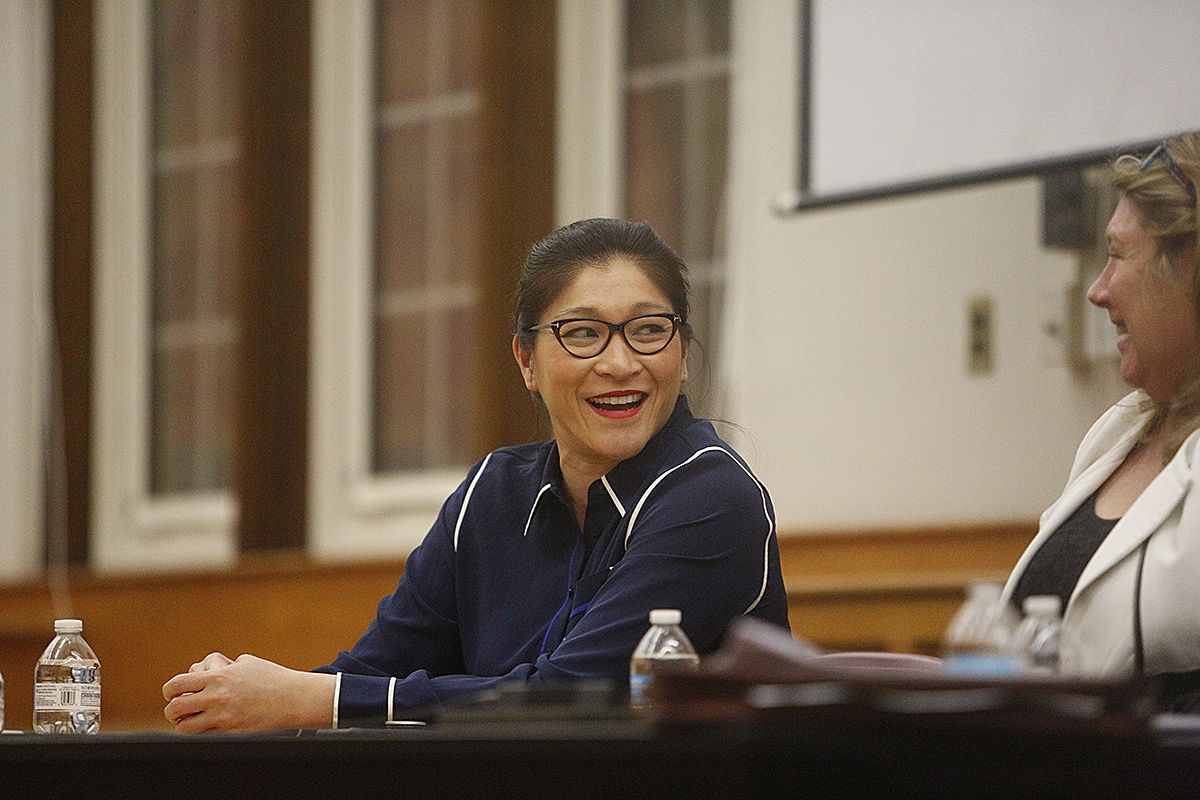 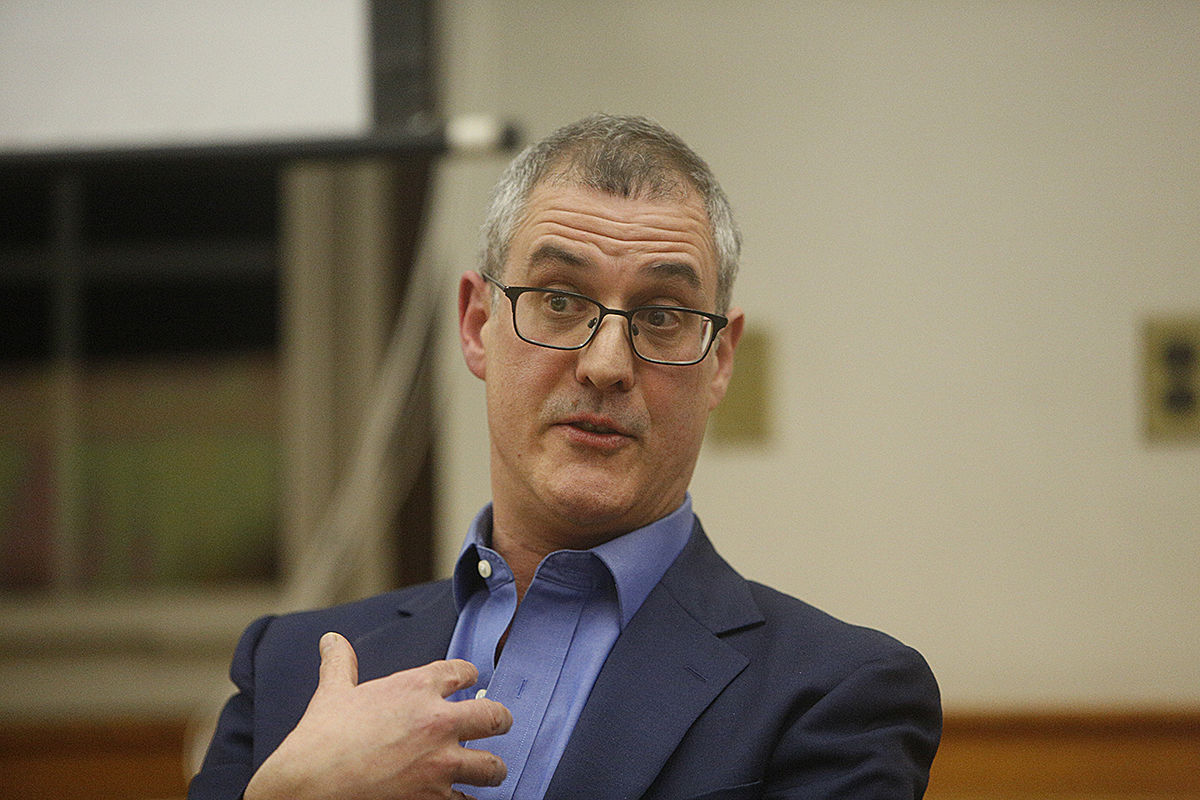 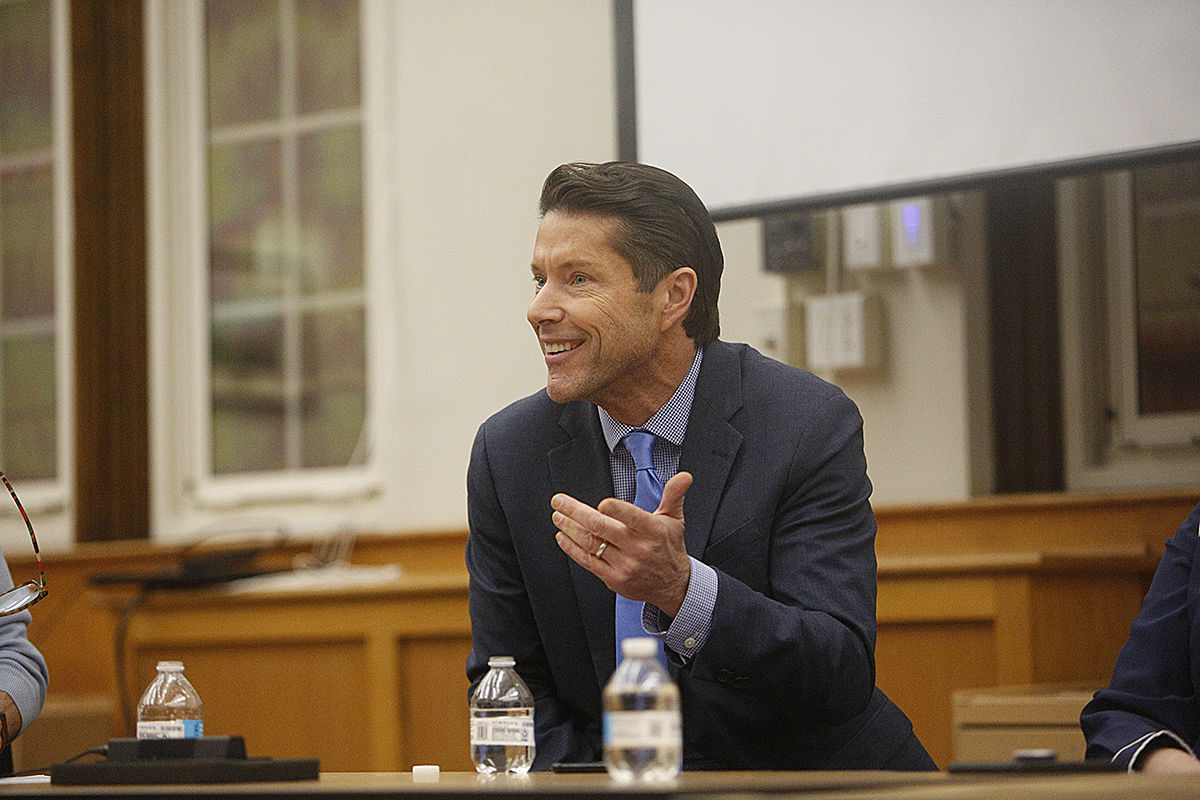 “This is about New York on the verge of making history,” said David Holland, executive legal director of Empire State National Organization for Reform of Marijuana Laws (NORML) and co-founder of the New York City and Hudson Valley Cannabis Industry associations.

Sponsored by the Scarsdale Adult School, the event was moderated by Jill Schlesinger, SHS class of ’83, host of the syndicated radio show “Jill on Money” and a business analyst for CBS News.

The panelists, respected professionals who attended Scarsdale Schools in the 1970s and ’80s, some now parents of grown children, talked about the history of marijuana, the health benefits and regulation of cannabis, the economics of the marijuana industry, and what has changed since its widespread prohibition 80 years ago.

Holland kicked off the evening with some humor [“My name is David, and I inhaled a lot!”] and somber historical context.

Marijuana had been used for centuries for health care and wellness, Holland explained. It is derived from the same species of cannabis plant as hemp, which was harvested in the British colonies and used in commercial and industrial products like sailcloth, rope, textiles and paper.

Following the Mexican-American war, Mexicans, along with freed slaves, headed north carrying hemp plants, which business leaders feared would compete with other crops like corn, tobacco, cotton, and even the timber industry owned by publishing giant William Randolph Hearst, who owned paper mills.

This, according to Holland, was the beginning of the “demonization” of marijuana by government officials like Harry Anslinger, a known racist, supporter of Hearst, and the first commissioner of the Federal Bureau of Narcotics. “Anslinger attacked cannabis by attacking culture and color,” said Holland, leading to the prohibition of marijuana in the 1930s, ’40s, ’50s and up through the time of the Rockefeller Drug Laws, the Nixon administration, and later to the “war on drugs,” with the black community hit the hardest.

In 1973, the punishment for selling two ounces of cannabis carried a minimum sentence of 15 years — the same as selling heroin, morphine, opium, or cocaine.

“It was so prohibitive, that there are people still doing life in prison for pot,” Holland said, adding that by 2015 there were 643,122 arrests for marijuana possession.

With an April 1 deadline approaching for the state’s proposed legislative budget, Gov. Andrew Cuomo announced Feb. 20 that he would visit Connecticut, New Jersey, Pennsylvania, Rhode Island and Massachusetts — states with cannabis regulation and vaping initiatives in effect — to see what has worked and what has not.

Though it is the second time legislation to legalize marijuana is being proposed in New York, Holland is optimistic that if passed, it would rectify decades of social injustices and lead to social equity, community revitalization and what he calls “social evolution and revolution.” It would mean convictions would be overturned and prison records would be expunged.

Regulation is the key, according to Amy Peckham, CEO of Etain, LLC, a registered organization providing medical marijuana products under the New York Compassionate Care Act.

“The amount of THC [the principal psychoactive component of cannabis] can range from zero to 40 percent,” said Peckham. “That doesn’t mean it can’t be given as a smaller dose. We can give you a 2-milligram dose or a 10-milligram dose.

“The problem with the illegal market is nobody knows what their plant has got. With regulated production you must have not only consistency, but homogeneity to your product. You can only have that outcome from regulation,” she said, adding, “I had to test everything, including paper towels, to prove our facility was free of contaminants.”

Dr. Junella Chin, a Scarsdale-based physician who integrates medical cannabis into treatment, discussed inspections of dispensaries overseen by the department of health, and research at Albert Einstein Medical Center, Montefiore Hospital, and NYU’s Langone Health for conditions like autism, ADHD and Parkinson’s disease, as well as the anti-inflammatory benefits derived from CBD, without “getting high.”

Stephen Konigsberg, (SHS '84) director of business development and general counsel of Tikun Olam USA, a multistate medical and adult-use cannabis brand based in Israel, and Timothy Seymour, (SHS '84) a principal of Seymour Asset Management and co-host of CNBC’s “Fast Money,” weighed in on the market-side of legalized marijuana, which is estimated to be a $50 billion industry.

“This is the biggest consumer products investment opportunity in 50 years,” said Seymour, referring to the hot new sector known as “pot stocks.”

But not all are ready to jump on the bandwagon. On Feb. 26, the day after the panel at SHS, Smart Approach to Marijuana, a leading nonprofit organization opposed to the expansion of the marijuana industry, invited Gov. Cuomo to speak with them about the outcomes of marijuana legalization in Massachusetts, Colorado and California, specifically.

“It’s important for Gov. Cuomo to hear from people on the ground — not just industry insiders or state bureaucrats who have an incentive to offer rosy evaluations of legalization,” said Dr. Kevin Sabet, president of SAM and a former senior drug policy adviser to the Obama administration. “Marijuana commercialization has led to significant harms upon public health and safety and he should hear from medical doctors, scientists, parents and people in recovery. It would be a disservice to New Yorkers for the governor to ignore their voices.”

Unlike California, New York does not offer voter referendums, so residents should be in touch with state and local officials, Holland said. “Your representative is going to make the choice for you. They ought to hear whether you’re in favor of it or not. It’s very important to let your voices be heard.”