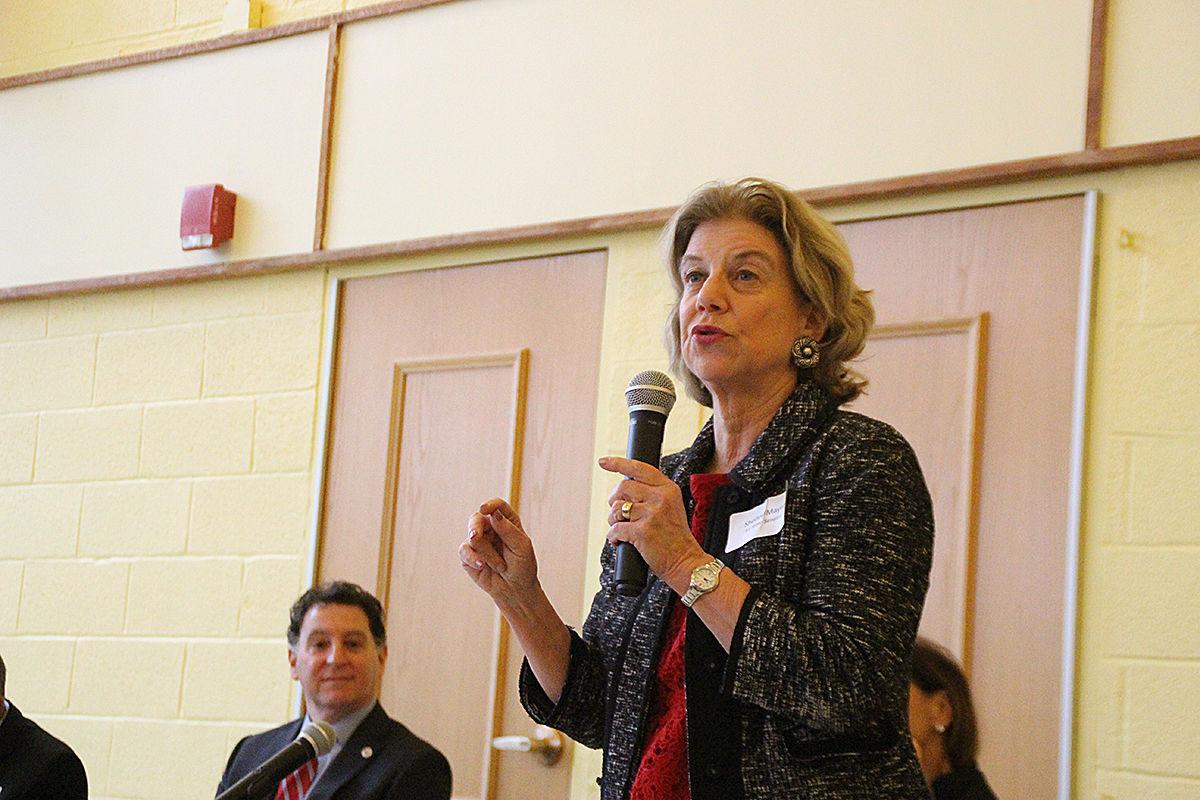 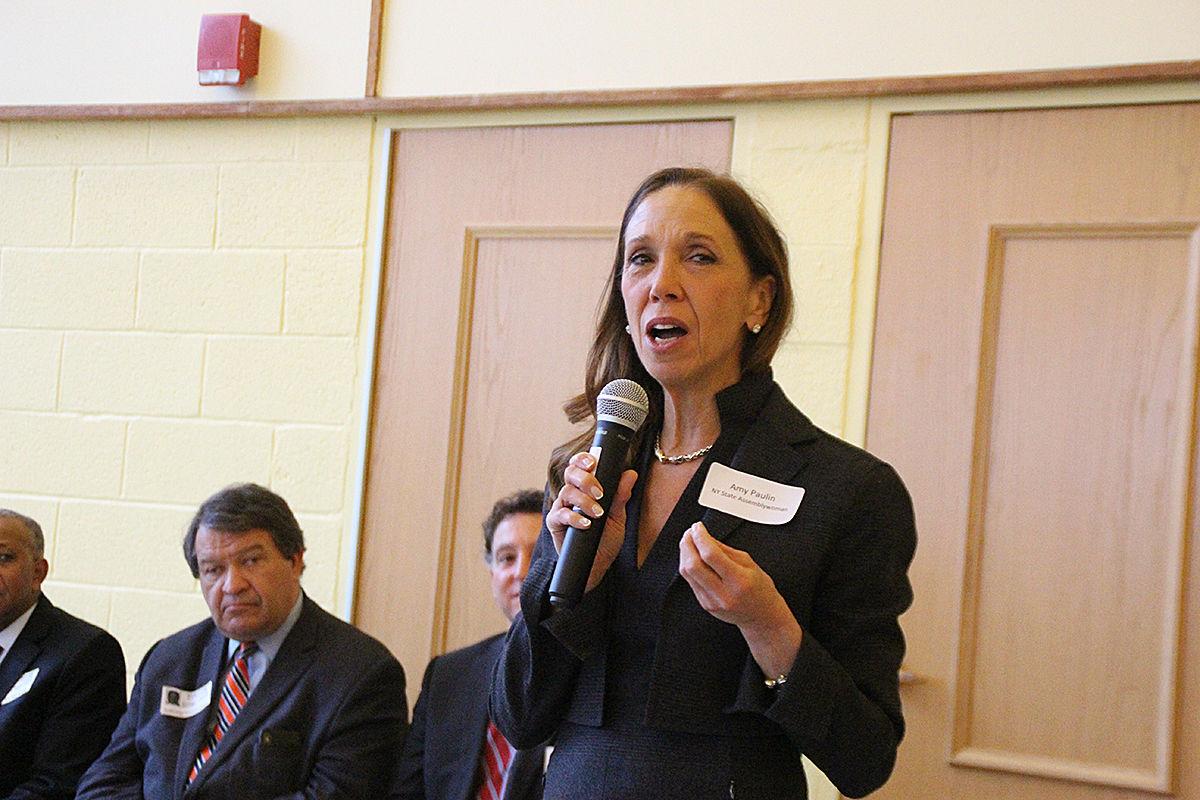 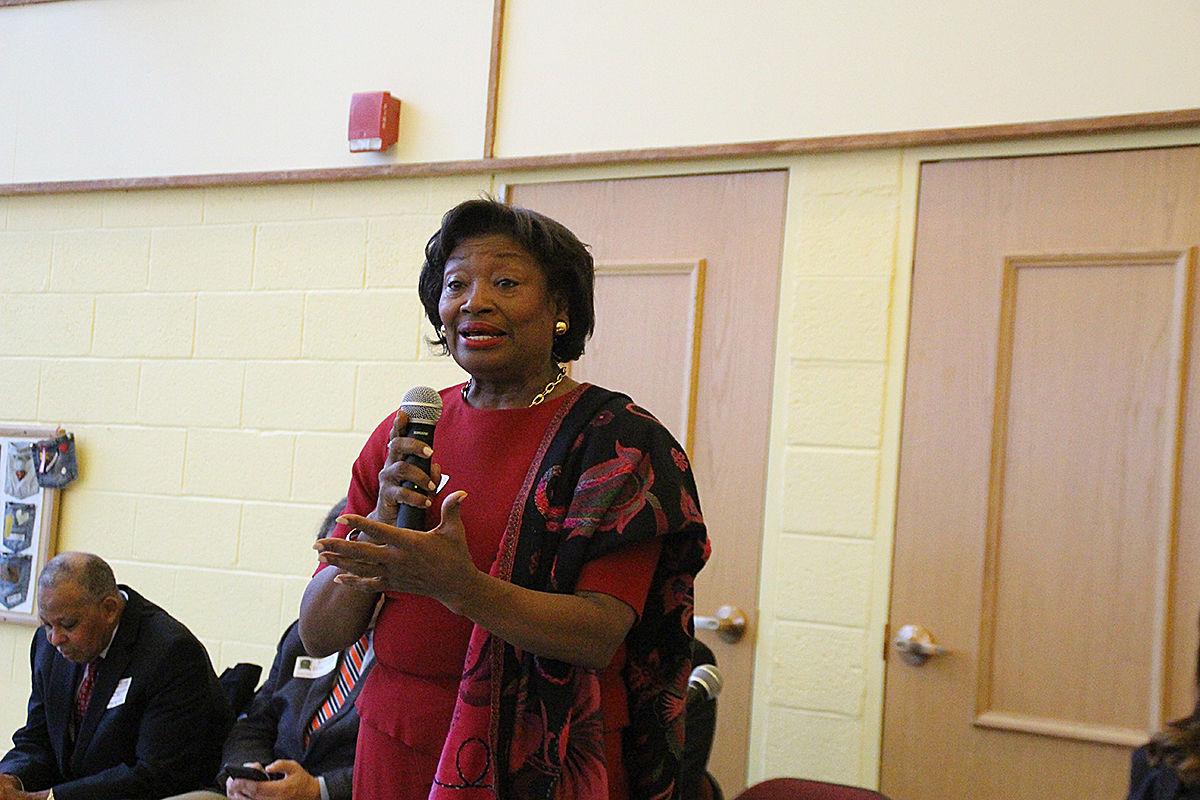 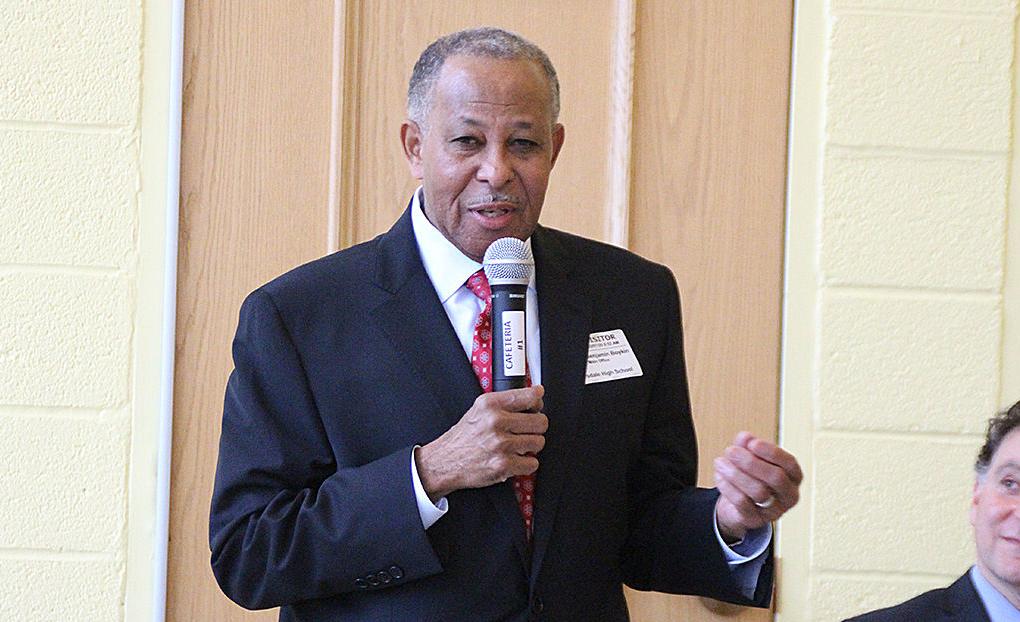 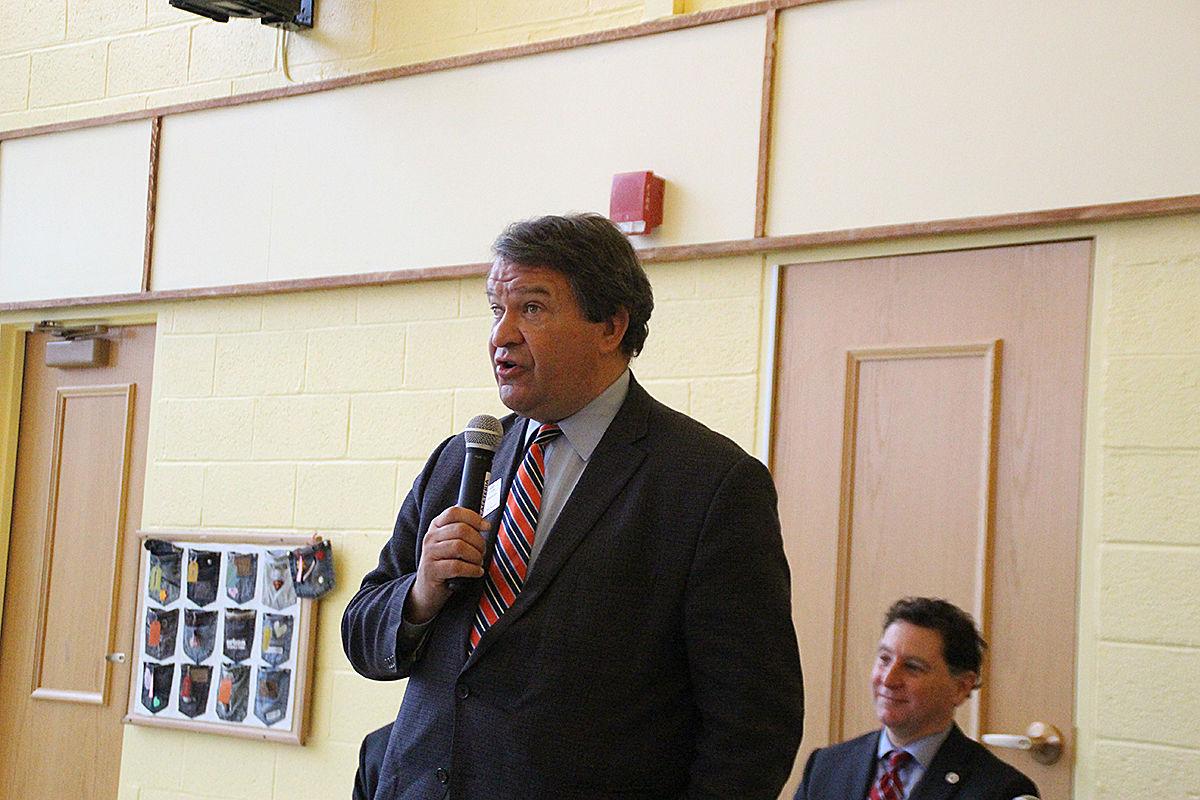 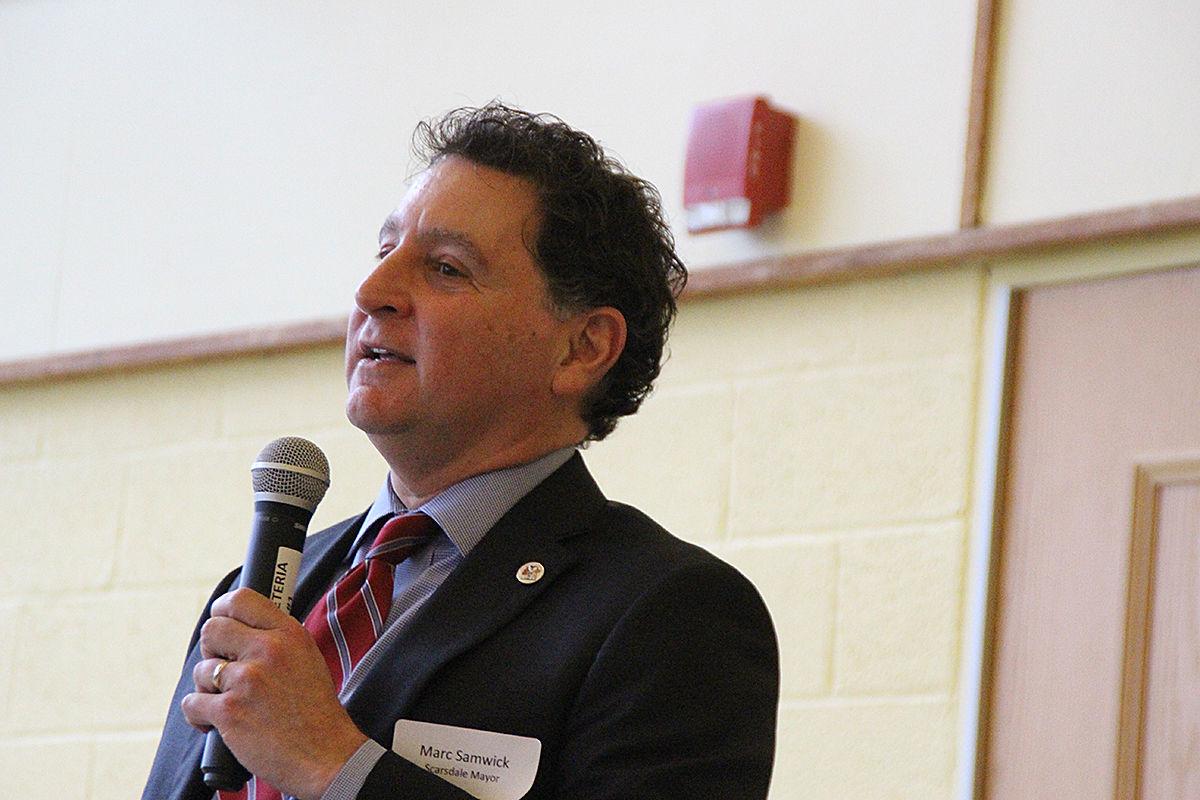 Or, as Scarsdale Mayor Marc Samwick said at the annual PT Council Legislative Breakfast, Scarsdale Schools are “the shining star,” the high-performing, exceptional schools that have long been heralded as a model of excellence throughout Westchester County, New York State and the entire nation.

A popular campaign slogan from the 1990s reminded all, somewhat slyly, that voters are persuaded by the state of “the economy” — or actually, of “the economy, stupid,” gently chiding any disbelievers of the salient truth. One could also safely say the quality of a school system is the overriding factor determining where people seek to live and, consequently, where property values stay high, even soar. As Assemblywoman Amy Paulin, a longtime Scarsdale resident, said, Scarsdale schools have attained a position of leadership not only for the scholastic heights achieved, but also for their ability and willingness to innovate and change.

The Feb. 7 breakfast was held at Scarsdale’s Quaker Ridge Elementary School and hosted by the Scarsdale Council of Parent-Teacher Associations and PTC Legislative Advocacy co-chairs Lauren Hertzog Fields and Rebecca Kirschner. It was attended by about 100 people, including district administrators, PTA and board of education members, as well as a group of select students from Scarsdale High School social studies classes.

The speakers were dedicated to a common theme: to heed and meet the needs of all schools. The group unhesitatingly lauded Scarsdale’s system and vowed a shared commitment to find ways that all students, including those from less affluent communities, could receive the same level of education.

State Sen. Shelley Mayer, who chairs the State Senate Education Committee, is a self-described “fighter for education.” She lives in Yonkers and represents a wide, gerrymandered area that includes both affluent districts and those with substantial needs (Yonkers and Port Chester).

“My job is to fight for every school and every student,” she said. “I want Scarsdale to continue to be in the lead as a terrific school district, very desirable for families [who] move here [and are] willing to pay taxes in order for their children to go to the excellent schools… At the same time the State has to do its fair share and not place all the burden on property taxpayers.”

Her committee is engaged in “a polite fight” with Gov. Andrew Cuomo over the money earmarked for education. “My job is to get more money in the education pool so it can be distributed more fairly,” she said.

State aid is based on Foundation Aid, “the building block of how the state funds schools,” said Mayer. The formula is currently outdated and flawed in part because the numbers changed when the recession hit in 2008.

Mayer said the governor is compressing aids that are traditionally reimbursable and placing them together with Foundation Aid so that it appears as if more money is going to Foundation Aid. In the long run, this will prove damaging to Scarsdale and all school districts as placing all in a single pot “would not be flexible in future years,” according to Mayer.

“Our job is to stand up and be very public that the state’s job is to fully fund the Foundation Aid formula and make sure that every district has the resources and flexibility it needs,” Mayer said.

Westchester County Executive George Latimer, a Rye resident raised in Mount Vernon, said without a public education system dedicated to raising all to a high achieving level “we won’t have the kind of society that we need and … want to have in Westchester and elsewhere.” This truth, he said, is based on “hard economic development.”

Major companies know that the residents of Westchester “have achieved an education level that allows them to work in jobs that bring them to this area,” Latimer said. Implicit in his remarks was that the greater the workforce talent, the better the county is able to attract and retain businesses.

Latimer spoke of the sales tax that was previously higher in cities and is now levied evenly across the board. Revenue reaped was shared and “we didn’t forget the schools,” he said. He hopes to find more ways for the county to be supportive. “School aid is critical,” Latimer said.

Andrea Stewart-Cousins, introduced by Fields as “the first woman to chair a legislative chamber in the history of the State of New York,” made her mission clear: “This is a collective opportunity to make sure that every child in the state gets the kind of education that they need to participate in and to really excel in this new world and global economy.”

Stewart-Cousins applauded Scarsdale, saying that the schools are “where we want to be” and at the level that “every kid should attain.” She added, “If we can harness the structure … the talent and the understanding of a high-achieving school and look at how they’re doing it … we will be able to lead in education not only in New York State, but in this country.”

The replacement for Regent Judith Johnson, a known crusader for education who died last October, must know that “New York has to lead the way in showing that public education in all of its permutations and combinations can be exciting for our kids … and allow them to lead a world that we’re depending on them to lead,” Stewart-Cousins said.

Paulin, who raised three children in the school system, said, “We come to Scarsdale very much so that our children can get a fine education in a public school system.”

Paulin said that while Scarsdale gets $6-$6.5 million in state aid, bringing the total per child to substantially less than the state’s mean and medium, Scarsdale “doesn’t complain.” However, it also needs to make sure that the aid level is maintained “so we don’t break the property tax cap imposed a number of years ago.”

She agreed that the governor’s building aid reimbursement proposal would be bad for Scarsdale and that “we can’t just merge the BOCES aid into the Foundation Aid formula.”

Nan Mead, a regent since 2016, and “a product of New York City schools,” asked, “How do we get a model like Scarsdale for the rest of the state?” noting that the needs of the North country must be balanced with those of downstate. “We continue to press to fully fund the Foundation Aid formula because all districts will benefit,” said Mead.

Benjamin Boykin II, chairman of the board, 5th District, Westchester County Board of Legislators, serves White Plains, Scarsdale and Harrison. He stressed the value of education, saying he served seven years on the White Plains School Board. Boykin said legislators are “always looking to pass laws to protect the health and well-being of the residents.”

Boykin gave kudos to Scarsdale High School graduate Jack Waxman, who prodded the board to focus on the dangers of juuling and praised a program where fifth-graders are legislators for a day. “We’re moving Scarsdale and the rest of the county forward,” Boykin said.

Scarsdale Mayor Marc Samwick said his office’s interaction with the schools is much more “nuts and bolts” and “functional.” He referred to shared services, community engagement and tasks performed on a daily basis, noting the successful installation of lights at Butler Field, an effort to plant trees at Butler and constant attention to traffic, pedestrian and bike safety.

“A large reason why most of us are here is … the schools, so protecting the schools is of the utmost importance,” Samwick said. “Our support of the schools is fundamental to everything we do.”

A lively Q & A session began with a bipartisanship question from SHS senior Michael Waxman, which led to a broad discussion. Stewart-Cousins said the national mood has created more polarization than ever and expressed hope that all in public service will eventually “walk across the aisle.”

Mayer said, “We care about every kid, regardless of zip code,” and, “Kids should not be the victims of the politicization of our environment.”

Sophomore Tal Blaustein asked how Scarsdale can be a model for underfunded districts, and how it can support surrounding districts.

Mayer urged Blaustein to “make yourself available to students at your doorstep as a mentor — those in Yonkers, New Rochelle, Port Chester.” She noted that most in southwest Yonkers have English as a second language. “Share your accumulated knowledge,” said Mayer.

Stewart-Cousins said, “There are schools that don’t have an instrument to play music… that are looking at textbooks a decade old, that do not have technology as a requirement, that don’t have art teachers, don’t have a psychologist or sociologist, schools that have one nurse between 10 different schools … We don’t want to take anything from you — we want to lift everyone so that they can have the opportunity because that’s what they need.”

Paulin stressed the importance of active parent participation and said, “As a student, you can tell us what’s working.” She championed Scarsdale’s ability to change, its willingness to re-examine the way we educate, its overall understanding that the curriculum should never be “so rigid that [it’s] just teaching to the test.” She urged students to “tell your parents, your peers” because Scarsdale’s innovations can be copied by other districts.

Said Paulin, “It’s about the money, sure, but it’s also about Scarsdale being who they are.”

And paying it forward, too.