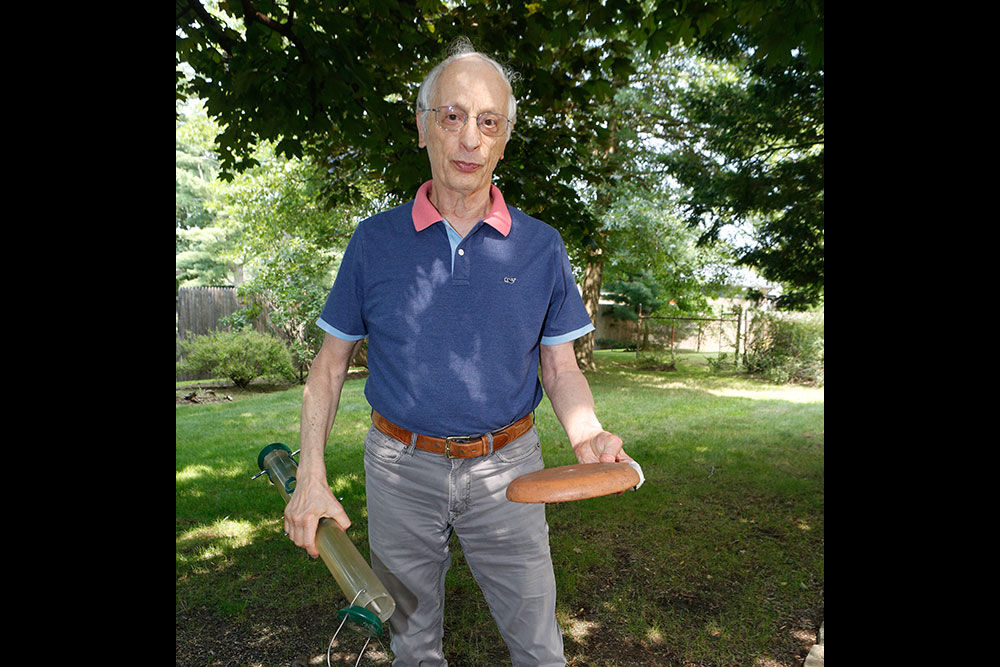 Richard Cantor with the empty bird feeder he took down on advice from the Audubon Society. 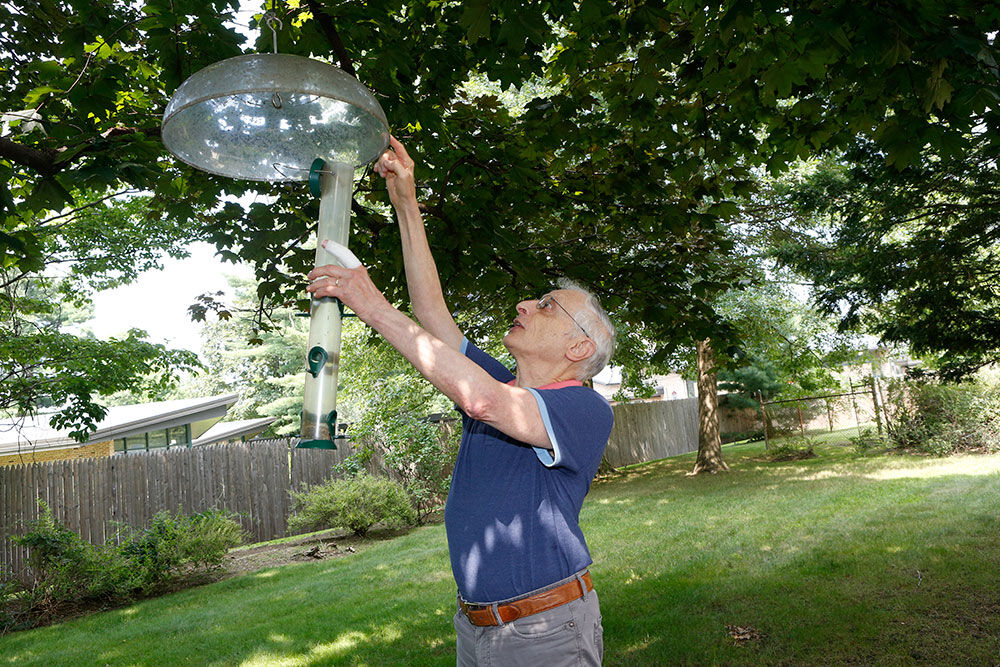 With millions of birds about to take to the sky for the fall migration, Scarsdale resident Richard Cantor isn’t taking any chances, and his local Audubon Society chapter says he is doing the right thing.

Like many local residents, Cantor enjoys maintaining bird feeders on his property to attract various bird species. However, this year he found a dead wren in his driveway near one of his feeders and, after doing some research, Cantor realized he was not alone. Something has been killing birds in alarming numbers along the East Coast.

Starting in the spring around Washington, D.C., an unusual number of dead birds with strange symptoms have been reported throughout the mid-Atlantic, southern and mid-western states. The situation led several state environmental departments and Audubon Society chapters along the East Coast, including the Connecticut Audubon Society where Cantor is a member, to recommend taking down bird feeders and birdbaths.

“We’re about to start the migration and everyone is holding their breath,” said Cantor.

That’s because scientists so far have not been able to pinpoint what exactly is killing the birds. Every year many fledgling birds die in nature, but this year has been different with an extraordinary number of dead birds, all of which have shown new, unusual symptoms. Many of the fledglings have been found blind with their eyes crusted over. The next phase brings on neurological problems that leave them spinning, shaking and falling, and eventually they die.

“Bottom line is we don’t want to be overly concerned, and the main message is we need to be cautious, watch it and minimize the effect,” said Patrick Comins, executive director of the Connecticut Audubon Society. “The numbers have come down since the start, but we don’t have the ‘all clear’ yet. If this is contagious, it’s terrifying how the birds can spread it.”

Scientists have ruled out a number of possible causes, including salmonella, avian flu, West Nile, Newcastle and other viruses and parasites. There was a theory it might be related to the cicada swarms this year, but that has also been ruled out.

With the cause still a mystery, the most alarming aspect is that several different species of birds have succumbed to the disease. That’s the main concern now, as millions of birds of all kinds, from songbirds to hawks, will start to migrate to new areas with the potential to spread the disease. If the disease is transmitted from species to species, then through the migration it could be spread among birds that live in habitats from the Arctic tundra in Canada all the way down into South America.

“Birds are a pretty diverse group, and we’ve seen it in robins, catbirds, blue jays, crows, grackles, woodpeckers … and now we’re seeing it in hummingbirds, a whole variety of birds,” admitted Comins. “That’s why we are just passing along the recommendation from the state to cease bird feeding activities that create gathering places.”

In Washington, D.C., one study said five hawks died from the mysterious disease, and that is a major concern because hawks, eagles and many birds of prey will start migrating soon and feeding on other bird species that might have the disease.

Cantor is used to seeing an array of bird species every day in his yard in Scarsdale. At least he was before he took his bird feeders down in early July after receiving the notification letter from the Audubon Society.

“Early in the morning they would all come … a lot of them,” Cantor said of the activity at his bird feeders. “We see all the wrens, the rock doves, pigeons, crows, blue jays, cardinals, and we have a Coopers Hawk that will swoop down and take one of the other birds. We see so many species, that’s why they’re concerned about the feeders.”

By removing his feeders, he said, “We’re just doing our little part to not bring them all together in case it’s a pathogen, so they don’t spread it.”

Currently, the spread has affected a wide region along the eastern seaboard, but the extent of the outbreak and the actual number of affected birds is still to be determined.

While the number of dead birds in places where it started like Virginia is decreasing, cases have been confirmed in Connecticut and New York and, overall, 12 states have reported cases of birds that have died from the disease.

“It’s hard to know the scale, basically from Virginia to Ohio and up to Connecticut,” explained Comins. “Rehabbers in Connecticut have freezers full of dead birds that are waiting to be tested. It’s very hard to say. We still don’t know, and that’s why we’re being cautious.”

With so many unanswered questions, the recommendation to remove all bird feeders remains in place. At this time of year, Comins explained, there is plenty of food in nature, including insects and seeds, for birds to feed on, so they don’t really need bird feeders to supplement their diet. However, in wintertime, birds that don’t migrate will need additional food sources. Hopefully by then the cause and possible a remedy for the mysterious disease will be figured out.

In addition to removing feeders, the Audubon Society advised that if you do find a dead bird, be cautious about handling it — wear disposable gloves and double bag it before disposing it.

The unusual disease is just one more problem for the vast local bird population that has seen a massive decline in both numbers and habitat loss over the last couple of decades.

“We’ve lost billions of birds in North America over the last few years, billions!” said Cantor. “We’re destroying the quality of the soil, the ecosystem, and we have a problem with extinction; [we are] losing species every day. It’s almost like the massive beehive collapse; it took a long time to hone in on what was causing it.

“The good thing is where there have been interventions we have seen success,” he continued. “They brought back bald eagles and falcons. The problem with this latest disease is that no one knows what is [causing] it, so we have to be cautious.”

All the animals, including the birds have COVID