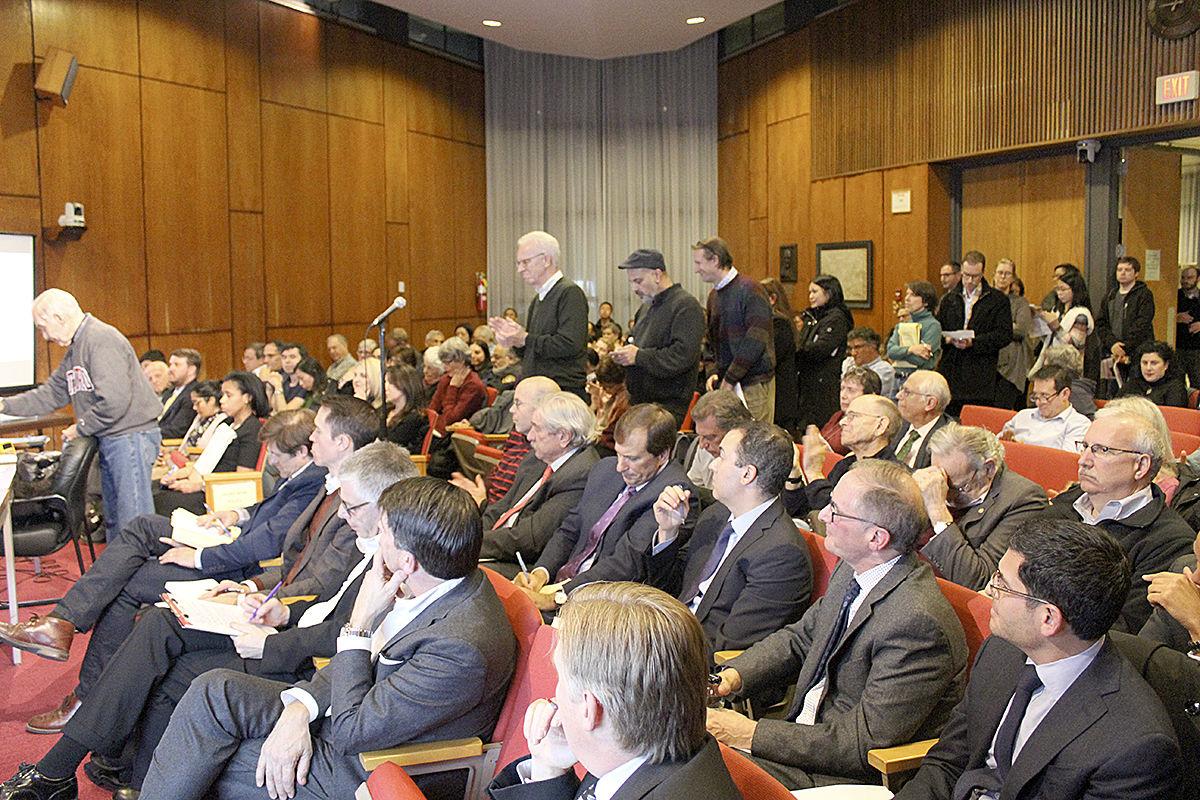 More than 30 residents addressed the village board Wednesday evening. 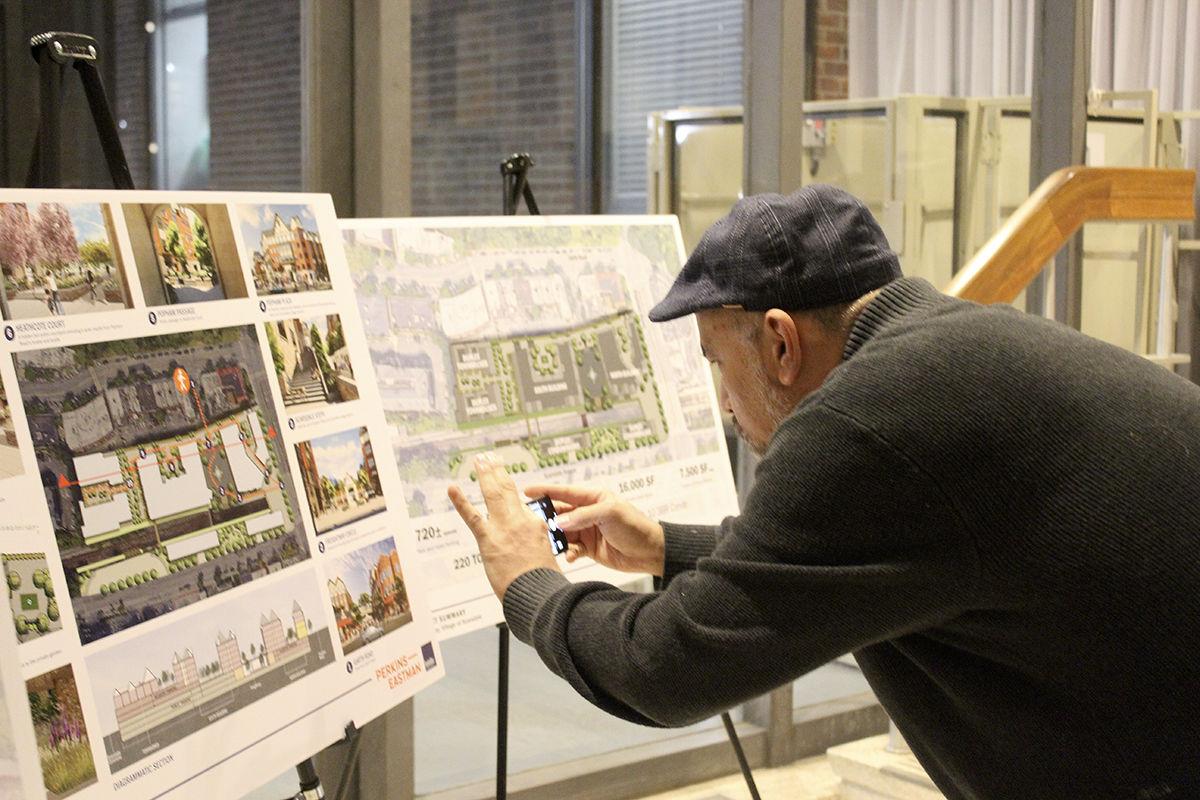 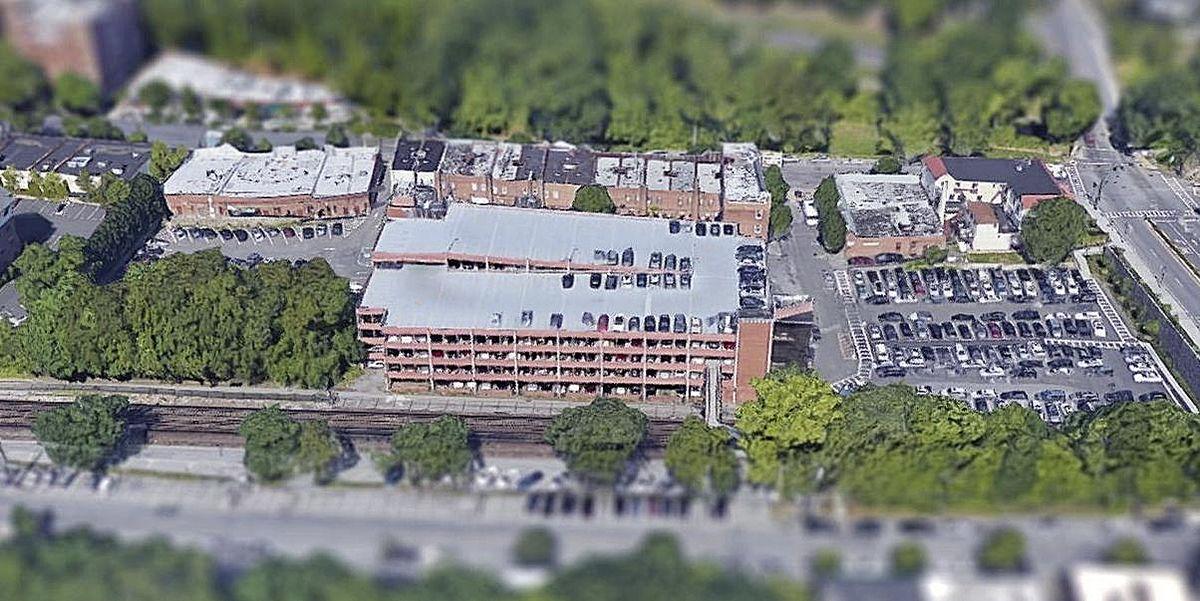 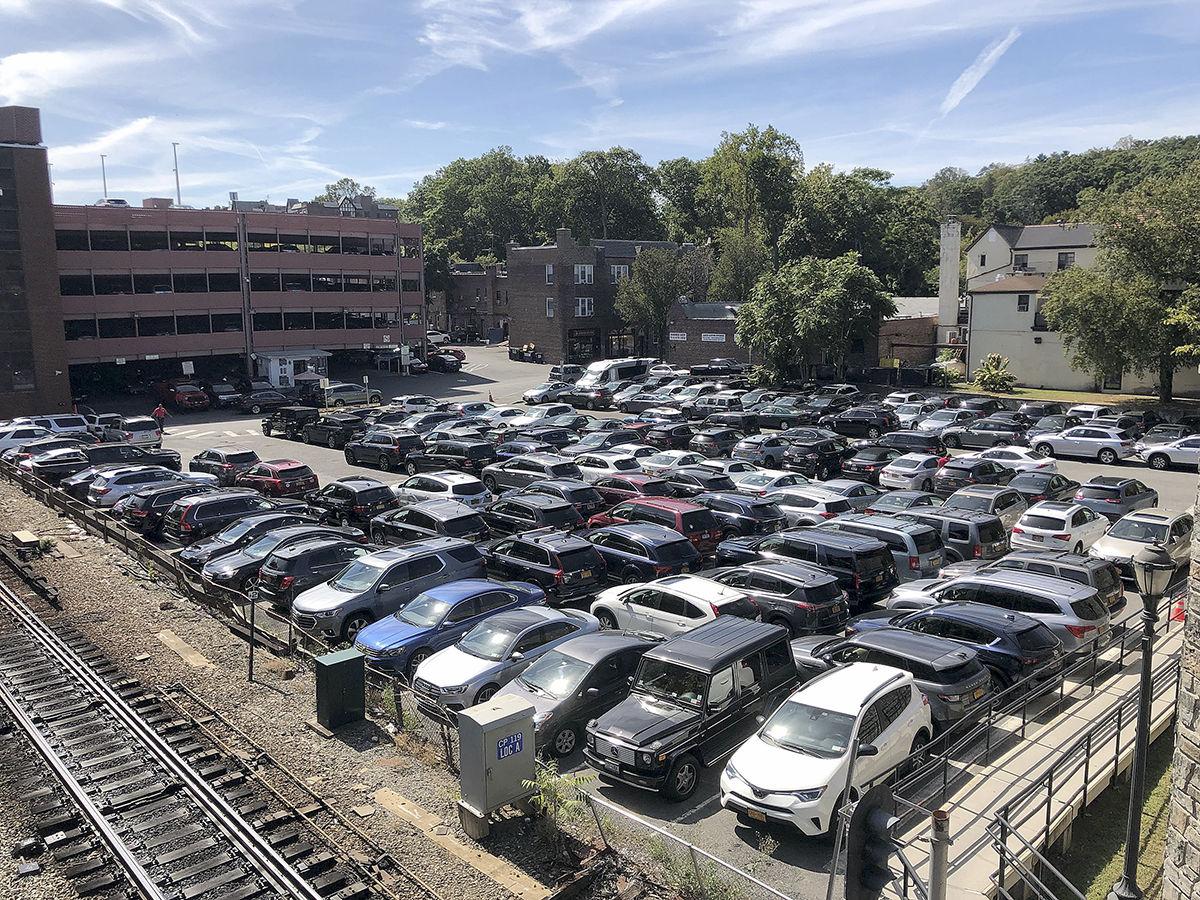 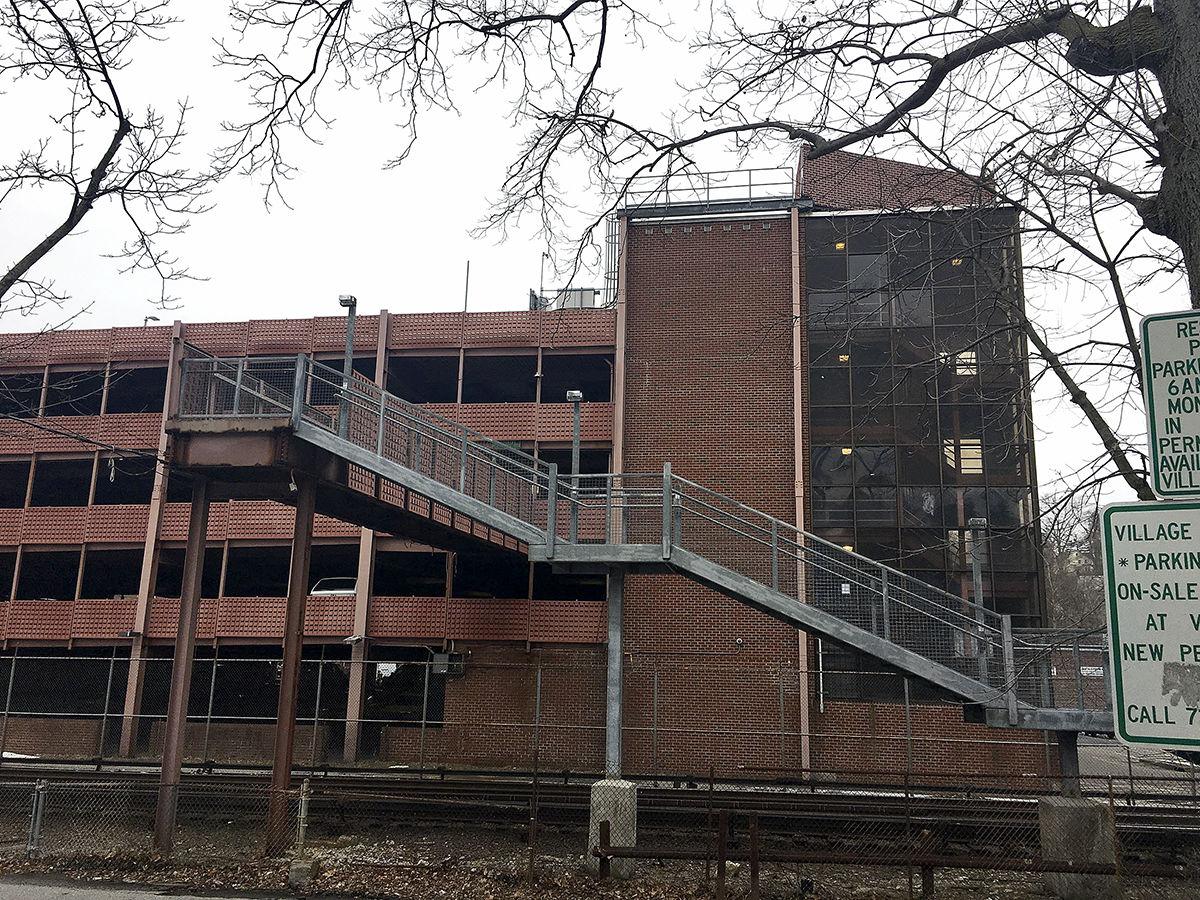 Rutherford Hall was standing room only Wednesday night, with every extra folding chair in the building moved into the courtroom to accommodate overflow. About 150 residents filled all the seats, and dozens more lined the perimeter of the room waiting for the community meeting with the board of trustees to begin.

The hot button topic was the potential redevelopment of Scarsdale’s Freightway parking garage on Garth Road. The garage serves as the primary parking facility for village merchants, commuters and others using the Metro-North Railroad station. In 2017 a conditions survey by DESMAN Associates determined the garage would require extensive repairs and maintenance that could cost up to $2.5 million by 2022. The board has also pointed out that the facility will need even greater repairs in the following 15 to 20 years, including a possible total replacement that could cost more than $25 million.

As a potential alternative to repairing the existing crumbling infrastructure, the board has been exploring the possibility of replacing the garage with transit-oriented developments (TOD). TODs are urban developments that maximize the amount of residential, business and leisure space within walking distance of public transit. In this case, instead of rebuilding the garage, a development with easy access to the Scarsdale train station would include retail space, walkways and connective corridors, parking, community and residential spaces.

In a prior public meeting, Deputy Mayor Jane Veron explained the board’s reason for considering this option. “The logic behind the effort is the need to improve the aging structure and enhance the entire village center in a viable and sustainable way,” said Veron. “This could enhance the village center by generating foot traffic for our local businesses and restaurants.”

Two developers were recently named as finalists in consideration for this project, if the village decides to move forward with it. On several occasions, Mayor Marc Samwick has made a point of saying the decision of what to do with the garage is far from being determined, but considering all options that could enhance the village, including a TOD, is part of the responsibility of the board. “Doing nothing or sticking with the status quo is an option,” said Samwick at a prior meeting.

At Wednesday’s meeting, two prospective developers, Avalon Bay and East End Capital, who is partnered with LCOR and Fareri Associates and Gateway Development, each had 40 minutes to present their preliminary plans and proposals to the public.

Samwick opened with a reiteration of his former statements, saying: “I want to be very clear we are not endorsing either proposal at this time or saying either is better than the status quo and just fixing the garage.”

Avalon Bay, a $37 billion public company, has completed similar construction in both Yonkers and Harrison, and has a Westchester presence of 2,100 retail locations and apartments. They laid out an image of the Freightway area that included parking spaces, increased retail space and public use open space, as well as easily walkable connective corridors.

East End and its partners, all private equity firms, presented a similar development plan, featuring pedestrian-friendly walkways, courtyards, retail space, parking and residential units. Both proposals are online to review in extensive detail at Scarsdale.com, and quick research online does show that similar developments are a trend that increases patronage and foot traffic in comparable downtown areas.

In anticipation of this project, Gateway acquired two parcels of land in the village at 2 through 20 Garth Road and 56 Garth Road that it would incorporate into the redevelopment if the firm were chosen for the project. Gateway recently worked on a similar project at the White Plains train station.

When the time came for public comment after both presentations, residents all but raced each other to the microphone, quickly forming a line more than 20 people deep. Though more than 30 residents spoke in the hours that followed, multiple residents brought up parking, traffic, taxes and the effect on the schools, and echoed the concerns of other speakers.

Bob Berg, a Tisdale Road resident who has lived in Scarsdale for 18 years, spoke first, mentioning the “massive property taxes” residents pay to support the schools. His primary concern was the residential developments proposed by both developers would be a potential detriment to the schools, traffic and village at large.

“We don’t want non-age restricted apartments, we want lower property tax burdens,” he said as the audience applauded in agreement. “I don’t feel the lower rental taxes will cover the tax cost of building these residences.”

Another resident commented that she would have also liked to see a rendering of the garage itself fixed up and improved as an alternative to the proposed redevelopments.

Many residents brought up the potential burden to schools if the site were to include rental units. Though Gateway presenters did mention building predominantly one- and two- bedroom apartments, which they felt would be less likely to be occupied by families with children than larger spaces, those who spoke at the meeting were skeptical, speculating that upward of 100 students might be added to the already stressed district, and all within the Fox Meadow School zone.

Alex Wolf of Harvest Drive spoke from firsthand experience, saying: “When we moved from the city, we lived with two children in a two-bedroom, one-bathroom apartment, and the people across from us had one bedroom with a kid. People who move here from urban areas do live in apartments with kids, that’s just how it is, and the theme here is huge developers want to come here to make money.” Likewise, he said the $500 per family over 10 years that it would take to fix the garage is “nothing” to local residents, and that they shouldn’t have to accept residential development for marginal public improvement.

Several parents expressed concerns about the inability of the board to know exactly how many students would be added to the school system, and pointed out the taxes renters would pay would not be equivalent to the taxes homeowners pay to maintain Scarsdale’s world-class schools. One resident mentioned a similar community in New Jersey with comparable schools that added fewer units in a redevelopment bid and saw such an increase in students that temporary classrooms had to be built.

Many others expressed concerns about the process itself, saying they felt it was not sufficiently transparent, that the TOD plan feels like a done deal, and that they wanted access to more information about different options.

Christine Weston of Taunton Road said she was concerned about the amount of community feedback the board has for the project. “I did the survey that was put out and was thinking my voice was being heard. But only 427 people answered the survey because it was not marketed well,” said Weston. “Everyone is addressing the village or downtown center, but I don’t know what it is anymore. All the storefronts are empty. Who is the person in charge of leasing the empty storefronts that would drive traffic to our town that these nice drawings won’t?”

Other residents concurred with concerns over the “monopolized downtown,” saying the majority landlord of that area, Rush Wilson, should be held at least partially responsible for the empty businesses. The mayor assured residents he and village officials were meeting with Wilson about revitalizing the downtown, but the mayor said studies show TODs bring about similar levels of revitalization that residents are looking for in Scarsdale.

“A handful of businesses went under because the times promised by developers were not honored and consideration for how the businesses on Garth would be affected were not taken properly. So what efforts would you make to not let this happen again? Involve local merchants more? What recourse do we have for loss of business in eight to 15 months of construction, which can be life or death for a small business? We are the heartbeat of this town.”

The mayor responded by reassuring the audience that the merchants on Garth Road are critical stakeholders and that traffic, parking and construction phasing and impact, as well as environmental impact would be fully evaluated and subjected to much greater community comment.

Several residents also called for alternatives that might be less destructive and would use existing space without a large, risky redevelopment, such as facilities for sports, a swimming pool, more small restaurants and ice cream shops, or other creative solutions — as well as just fixing the garage.

Mayor Samwick responded, “My goal in moving forward this far isn’t to make it seem like the decision is made, but to provide enough information to make an educated decision. I do not want this to appear predetermined, I just want to explore it thoroughly.”

Though comments were made with various levels of apparent annoyance, curiosity, and even sometimes rage, it became clear this specific meeting drew many residents who were skeptical of the ability of this type of TOD redevelopment to provide benefits that would outweigh the costs. With a community interested in upholding its reputation, holding on to its many empty-nesters, and maintaining its world-class schools, while also making things like parking and commuting easier than they currently are, there is a lot to be considered.

I don't think many residents knew that the Freightway site was even zoned for the Scarsdale school district. Now they will know and will be guided accordingly to share their concerns about a likely overcrowding effect of new apts. in this site.

Our upcoming Kids section will be chock-full of pictures of your kids, chosen from the contest entries. And the winner — the quintessential “kid” — will be featured in full color on the cover of our special section. It’s fun and easy to make your cutie pie a media star.